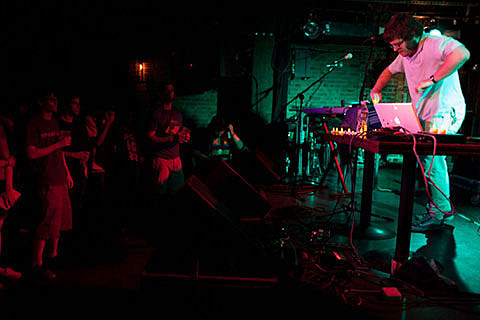 It's kind of odd to go to an indoor show that starts when the sun is still up, but the Mercury Lounge's back room makes you lose your sense of time. The opener of the early show back in August was the one-man electro-pop act Baths, which is the project of 21-year-old Will Wiesenfeld. "Hi. Whoa! Sorry to scare you!" Wiesenfeld said as his voice suddenly broke through the soft chatter. "Hi New York. It's very sweaty here. I'm not used to it, but it's cool... I'm going to start playing music."

Baths consists of a laptop, a mixer, and vocals. Wiesenfeld projects the kind of lovable (but somewhat awkward) intensity you might expect from the 'hero' of a Judd Apatow movie. Though his work required him to be at arms length from the mass of knobs, dials, and buttons, he didn't let that stop him from some serious upper body dancing, and his energy was contagious.

After playing a handful of songs, Wiesenfeld began to talk over the concluding notes of a song. "This is going..." He stopped, and switched off the reverb. "This is going to be my last song. Stay tuned. Fol Chen is next... Oh!" he exclaimed, momentarily switching off his music. "And I'm Baths. B-A-T-H-S," he said excitedly, almost as an after thought.

When Fol Chen singer/guitarist Samuel Bing walked on stage in his bright red shirt and pants combo, the crowd snickered a little. But when the remaining four members of Fol Chen joined him - each wearing the same outfit (save Sinosa Loa, the sole female member who wore black tights to match the shiny black buttons of her red shirt), the reaction changed to something akin to amusement. "Matching outfits? Yes!" said one audience member toward the front of the room. Maybe I was just influenced by the White Stripes-like aesthetics, but the instrumental interludes seemed reminiscent of a tasteful soundtrack to an old sci-fi movie - playful, but definitely eerie as well.

In the studio, a significant portion of Fol Chen's music consists of samples, but their music translates well to a live setting. Their sheer weirdness mixes irresistibly with their alluring vocals, irrepressible beats, and 80s-tinged keyboard riffs. The frenzied drumming propelled the music and threatened to transform Fol Chen into a hypnotic martian marching band of sorts. (The brief addition of a trumpet for one of their songs only reinforced the image.) Everyone but the drummer - who was working up a real sweat - contributed backing vocals, but even he approached the mic for one song near the end of the set. Fol Chen was also joined on stage by Kárin Tatoyan whose cover of "In Ruins" appears on the band's "In Ruins" EP (as does a remix by Baths).

During the song "The Idiot," back-up singer (and recent New York-transplant) Patrick-Ian sang, "Everyone here thinks it's a joke," which seemed to be an interesting tag line for the evening given the borderline cult-like and somewhat ridiculous matching outfits, but joke or no joke, their music is worth a listen.

We already posted pictures from that show (the above review got lost in my email) (until now). Baths, if you hadn't noticed or figured it out, are/is in fact playing NYC as part of his tour with Dosh and headliner El Ten Eleven. That takes place at Knitting Factory on Thursday, September 16th (tickets still on sale).

For an MP3, grab the free EP Baths appears on over at Heart Music Group's Bandcamp.