Batilus on stage with Kat of Salome (more by Chris LaPutt) 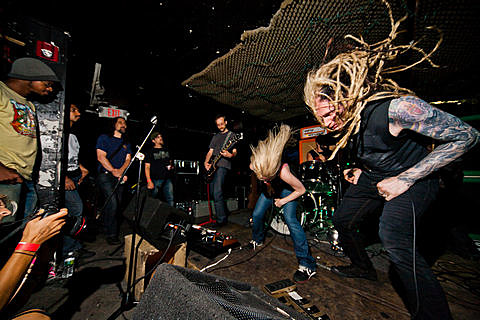 Complete Failure. Celeste. Thou. These are some of a few bands that have offered their recorded output for FREE in the past, and considering the quality of those releases, they easily could have charged for those LPs. Now two other bands that have offered their material for free download in the past, Batillus and Kowloon Walled City, will hit the road for a string dates which will include TWO NYC shows. Both shows will be presented by BrooklynVegan & 1000Knives with a performance from Riff Cannon on the first date, Cake Shop on Sept 18th, and Liturgy on the second, October 2nd at Acheron.

Batillus was last seen at Cake Shop, where the band destroyed amidst a similarly fierce lineup of Salome and Landmine Marathon. Video from that show and tour dates are below...