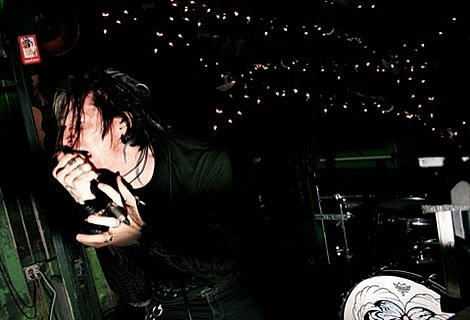 Now that Fade Kainer (Inswarm, Batillus, Jarboe) is back in the country after the volcanic ash debacle that stranded him and the rest of the Jarboe band in Europe, the dreadlocked vocalist of Batillus is ready to belt it out. The downtuned destroyers have scheduled an NYC date at Party Expo TONIGHT (4/29) with Riff Cannon, Yorba Linda and Bad Dream, as part of a short tour on the way to Chicago:

Why are we going to Chicago, you ask? We're recording our debut full-length in May at Volume Studios with the much-lauded Sanford Parker (Yob, Rwake, Unearthly Trance, Nachtmystium, Pelican). We have seven songs written clocking in at nearly an hour, of which we expect probably five to make it to the final LP. After doing a pair of EPs on an extremely limited budget and a tight schedule, we're very much looking forward to taking our time this go-around and coming out of the studio with something that really represents us as a band; something that we can really be proud of. More details on the full-length will be announced in time.

The NYC band also have a split 12" due this summer via Vendetta with Hallowed Butchery, which will contain three tracks previously available on Batillus's rare and sold out Beard Destroyer Tour EP (a track from that EP is above). Hallowed Butchery released their (his?) EP Funeral Rites for the Living late last year. Stream the entire thing at HB's site, and/or download a pair of tracks above.

In addition to the bash at Party Expo, the quartet have also scheduled a date at Lit Lounge on 6/7 as part of a release party for Castevet's Mounds of Ash along with Woe and Flourishing. Full tour dates are below. Woe also play NYC TONIGHT (4/29) as part of a show with Alcest and Have a Nice Life at The Studio at Webster Hall (tix).

In related news, Jarboe has rescheduled the previously cancelled date at Union Pool. The new show is May 25th with Hull. Tickets are on sale.

Full Batillus dates and videos are below...