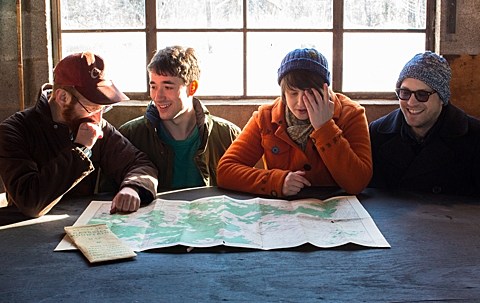 Upstate NY's Battle Ave put out their debut record back in 2011, and they're just now getting around to giving it a followup. It's called Year of Nod, will be out May 5 via Seagreen (pre-order), and features contributions from Frankie Cosmos, Nick Corbo of Crying and LVL UP, and more. Kevin McMahon, who's worked with Titus Andronicus, Real Estate and others, produced it.

So far two songs are out from the album, "Aleph" and the brand new "Zoa," which are both chilled-out reverby indie rock with some really nice vocal melodies. Check them out below.

Battle Ave are also touring, including two shows in NYC. First they play one this week at Palisades on Thursday (4/23) with Peaer, Self and Other and Robot Princess ($5 at door), and then they return to Palisades on May 14 with O-Face, Groam & Joan son of Groam and Happy You (tickets).

Filed Under: Andrew Sacher, Battle Ave, Groam and Joan Son of Groam, Happy You, O-Face, Peaer, Robot Princess, Self and Other
Categories: Music News, tour dates
Comments
Leave A Comment
Back To Top