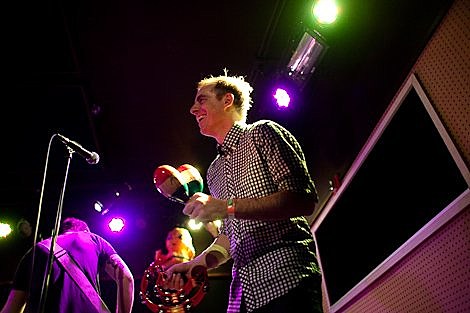 While in town for an instore at Generation Record on Thursday (6/17), Ted Leo will also be filming a video for his song "Bottled in Cork," directed by Tom Scharpling (of WFMU's The Best Show). The filming for that will be in Brooklyn at a "top secret filming location" around 4pm on the same day. When the video shoot was announced yesterday, we got confused because it seemed to be happening at the same exact time as the instore. Ted has since cleared that up, sort of. His message with more details and how to RSVP for the video shoot are below.

Ted Leo heads out on tour with Screaming Females after these NYC things, and will be back for Siren Fest in July.

Details on the shoot (including instructions to "wear finest theater-going or punk-rocking attire") are below...

Be In The New Ted Leo & The Pharmacists Video!

We need YOU to play a theater-goer or punk rocker in the new music video for Ted Leo & The Pharmacists, directed by Tom Scharpling. Wear your finest theater-going or punk-rocking attire and come to our top secret filming location in Brooklyn by 4pm on Thursday, June 17th. You'll be done and ready to head home (or to Ted's in-store at Generation Records) by 7pm. RSVP with your email address and we'll contact you on Wednesday night with the location and address. [RSVP]

SO - a little confusion about the tweets and e-vite that went out today regarding the video shoot vs. the Generation Records instore I'm doing on Thursday.

The video shoot has been brought together xxxtremely quickly, like, seriously just over the last couple of days, and details, are still developing as I write this; but earlier today, it looked like the schedule for shooting the theatre crowd shots we need WAS going to conflict some with the instore.

NOW, the e-vite says filming will be 6-10 PM, and that may yet be the case, and that would then conflict with the instore, BUT, it looks like we might be able to bump it up to 4-6 PM [which is what looks like happened], which would enable everyone who wants to do both things, to do both things, AND to cut down on costs at the particular venue we're currently talking to, we can only accommodate 100 extras, so the list may fill up, if we're lucky, relatively soon... ALSO, said venue selection is still slightly in flux, and that may yet change things on all fronts as well.

SO, my advice is to RSVP to the e-vite with whatever your personally most appropriate response is, SO THAT you can be updated through your e-mail about all of these changes and anything that gets nailed down as soon as it happens!
THANK YOU FOR YOUR INTEREST, and I'm sorry that this is all so by the proverbial seats of our pantses (but you've probably come to expect that from us by now, no?).

HOPEFULLY see you at both the video shoot AND the instore on Thursday.
Thanks again. xo - T [Ted Leo]