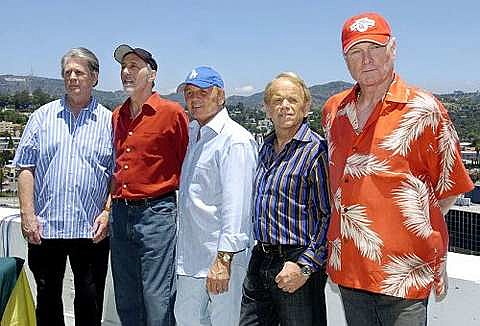 The Beach Boys are still making their way around the world on their 50th Anniversary tour, which hit NYC for two Beacon Theater shows earlier this month and another NYC-area show at Westchester County Center this past Tuesday (5/15). They're in Atlantic City this Saturday (5/19) and we already know they'll return to the NYC area next month for shows at Jones Beach on June 24 (tickets) and PNC Bank Arts Center on June 27 (tickets).

Tickets for those shows are still available, but if you don't wanna fork up the cash (and don't mind waking up really early), you can catch The Beach Boys at a free show in Central Park on June 15 as part of Good Morning America's Summer Concert Series, which means they'll be performing close to 8 AM ("Viewers interested in joining "GMA" in Central Park are encouraged to arrive at Rumsey Playfield via the 72nd street entrance on Fifth Avenue at 6:00am when the park opens to the public. All concerts are free and open to the public and will take place live during "Good Morning America," Fridays from 7:00 - 9:00 a.m. ET."). Other announced 2012 Good Morning America bands include Counting Crows, and boy band The Wanted (full announced list below).

Should be a fun way to start your day if you're already in the show-going mood from Northside Festival, which starts one day earlier (6/14) and runs through 6/17.

This won't be the first time that The Beach Boys play in Central Park. Check out some videos when they played in 1971, which aired on ABC-TV as a production titled, Good Vibrations in Central Park, and a news station clip of their 1977 show in the park, along with a list of updated dates below...