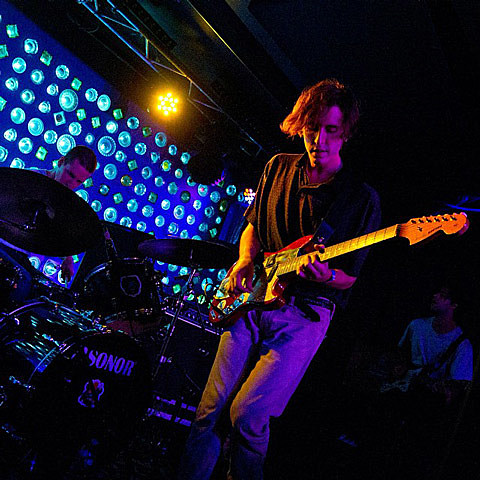 EMILY MCDERMOTT: So what are you working on at the moment?

DUSTIN PAYSEUR: I've been writing a new Beach Fossils album with the whole band, which is the first time we've all written together. A lot of the time we're not actually writing--we're just making horrible nu-metal jams--but we've also made a lot of progress. I get really bad writer's block when I'm stuck in my own head for too long, so working with everybody has been nice. I also have a project called Glass Bricks with my friend Rene, and it's inspired by industrial music, but more future-based instead of throwback. Then there's this sludgy noise band, Divorce Money, and another band, Laced, that's like punk music, but more slowed down and melodic. And I'm starting a record label with my wife! There's been a lot of shit going on, [but] working on everything helps me focus. If I only have one thing, it drives me completely insane. - [Interview]

Beach Fossils just wrapped up their tour with Heavenly Beat and Axxa/Abraxas, which kicked off with two sold-out nights at Baby's All Right. The band will play NYC again during CMJ at Brooklyn Bowl on Thursday, October 23 with Small Black, as well as Wardell and Fiance. The show, which is also the launch party for FLOOD magazine, is free if you RSVP now. At the door, tickets will be $12. CMJ badges will be accepted too.

The only other upcoming show on Beach Fossils' schedule is Washington, DC's Rock N Roll Hotel on November 7.