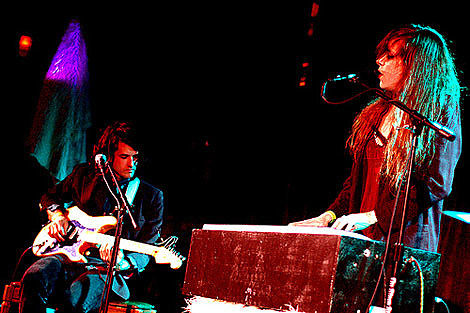 Due to the overwhelming demand for our June 16th show at Radio City Music Hall, we've decided to add another New York show this summer in beautiful Prospect Park as part of Celebrate Brooklyn on July 27th. We're very excited to play just a few blocks from home and to have Beach House join us as a special guest (if you haven't heard their incredible new album "Teen Dream" yet, you should). We'll be in touch again soon regarding additional shows as we firm up plans.[The National]

Tickets for the National & Beach House at Prospect Park go on sale Thursday (2/4) at noon (not 2pm as originally reported).

National side project Clogs have an upcoming show and a new album coming out. as well.

Beach House have a spring tour of their own coming up, part of which is opened by Washed Out (though maybe not their Webster Hall show in May). Washed Out just added an April 10th Music Hall of Williamsburg show with Small Black (who are at Brooklyn Bowl Saturday, Feb. 6) and Pictureplane to their three-band tour together (they're already playing two nights at Mercury Lounge in March). That trip goes to SXSW and Mexico too. Tickets to the MHOW show go on sale Friday at noon. All dates below...