members of Grizzly Bear on the beach (CRED) 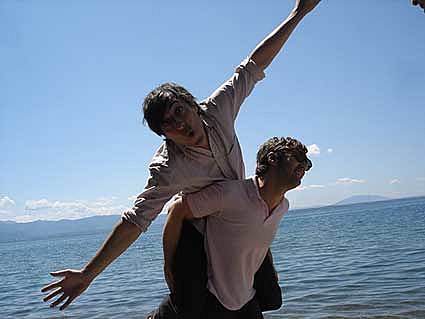 We've already discussed the fact that the band Beach House were popular on the Internet in '06. That didn't stop me from being surprised that their song Apple Orchard made #8 on Pitchfork's "Top 100 Tracks of 2006" list. Almost equally surprising was Beach House's whole self-titled album making #16 on Pitchfork's list of top albums. That's a better score than the Thermals, Yo La Tengo, Hot Chip, Califone, Cat Power, Lily Allen, Belle and Sebastian and even Destroyer. It's not as good as Grizzly Bear though - they were the owners of #8 on the albums list.

Beach House has been added as an opener at the March 6th Grizzly Bear show at Bowery Ballroom in NYC...which is messed up because according to Stereogum Beach House puts on the better show (I kid). Papercuts are also opening at this and many other Grizzly Bear shows.