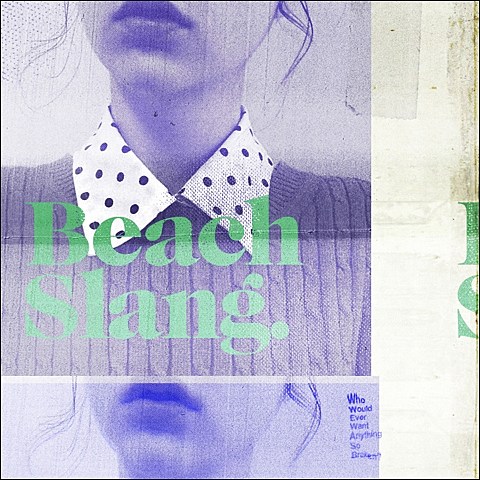 '90s Bethlehem, PA punks Weston broke up back in '01 (though reunited only five years later), and now guitarist James Snyder is fronting a new band Beach Slang. While new bands from veteran musicians can often leave you longing for their previous project, Beach Slang is really inspired stuff and sounds very in the now. Well... actually it sounds very '90s, but maybe that just further proves how this stuff isn't going out of style.

Snyder's low, raspy voice and the way he rolls off lines like "But the night's still young / And we're dumb enough to fall" brings back the feelings of classic-era emo voices like Jawbreaker's Blake Schwarzenbach and Knapsack's Blair Shehan. And as more than one person has pointed out, Superstar Car Wash/A Boy Named Goo-era Goo Goo Dolls is all over these songs. That familiarity makes these songs easy to listen to, but Snyder's post-'90s perspective is what keeps them sounding fresh. Lyrically too -- despite the way it's written, when his weathered voice lets out, "We're just some dumb kids getting wasted and knowing we're alive," it doesn't come off like he's talking about the present tense.

Take a listen for yourself by streaming their debut EP, Who Would Ever Want Anything So Broken?, which came out this past April via Dead Broke Rekerds, below.

The band, which is based in Philly and also features fellow Philly scene musicians Ed McNulty of NONA on bass and JP Flexner of Ex Friends on drums, also have some shows coming up. They'll play The Fest this fall, but sooner than that they have some Northeast shows with likeminded band Crow Bait including one on Long Island at Soul Sounds on June 12 and another in Brooklyn at Suburbia on June 13. All dates are listed below.

Meanwhile, Ex Friends, who themselves are fronted by a member of a '90s punk band, Plow United (Weston's pals from back when), are releasing a new EP, Animal Needs, next week (5/13) via Coolidge Records which you can now stream in full below. They also have a tour coming up which kicks off in Brooklyn on May 15 at Acheron with Retreevers, Mikey Erg and Eli Whitney & The Sound Machine. Tickets for that show are on sale now. All of their dates are listed below too.

Beach Slang - Who Would Ever Want Anything So Broken?