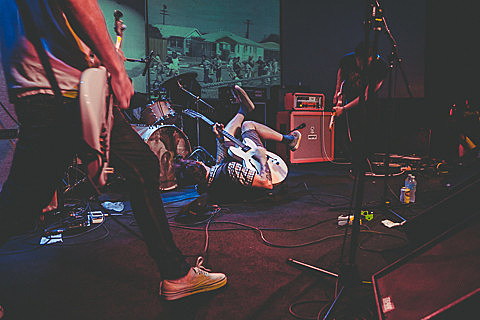 As discussed, Beach Slang's second EP of 2014, Cheap Thrills On A Dead End Street, comes out soon via Tiny Engines. You've already heard the excellent "American Girls and French Kisses" and today NPR premiered another banger from it, "Dirty Cigarettes." Where "American Girls" was one of the Slang's faster cuts, "Dirty Cigarettes" has them slowing down a bit and sounding more somber, but still dishing out some of the most quotable punk rock in recent memory. "All I want are records on my stereo, I'm better off baby when I'm all alone," singer James Snyder offers before quickly taking it back, "...that's a lie." It sounds like he's trying to convince himself more than he's trying to convince us, and it's effective. I mean who hasn't said they're "better off alone" without believing themselves for a second?

Since we last spoke, they also released the EP's opening track "All Fuzzed Out." Besides being an apt descriptor for how their guitars sound, "All Fuzzed Out" is yet another three minutes of Beach Slang in fine form. "American Girls" has James screaming in the basement with his friends, "Dirty Cigarettes" has him alone with his records, and this one's kind of a love song. "All of these sounds are really just my heart plugged in played loud." Sometimes you just can't ask for more than that.

Beach Slang recently wrapped up their tour with Modern Baseball which hit NYC earlier this month (pictures), and we mentioned they'd be back in NYC for the Saint VItus (10/14) stop of Cheap Girls' tour with Lee Corey Oswald (tickets). It's now been announced that Beach Slang and and Lee Core Oswald are actually on several dates of that tour, as are their Tiny Engines labelmates Signals Midwest (including the Vitus show).

Updated dates are listed, with the two newest song streams, below...

Beach Slang - "All Fuzzed Out"

and in case you missed it... "American Girls And French Kisses"