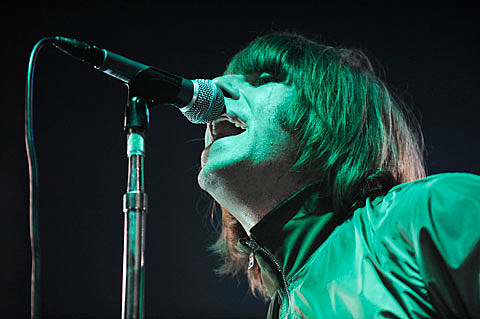 Beady Eye (Oasis minus Noel Gallagher), who made their public NYC debut at Webster Hall last month, are returning to North America this fall for a short tour. The tour ends in NYC on December 9 at Terminal 5. Tickets go on sale Friday (7/15) at noon. "The band will be joined by Matt Jones on keyboards and Jeff Wootton on bass for all dates."

Beady Eye recently made a video for their track "The Beat Goes On." The video, which you can watch below, was filmed at the band's Isle of Wight performance and directed by Charlie Lightening. The band are releasing the song as a single on their own label with the previously unreleased track "In The Bubble With A Bullet" as the b-side. The single comes out July 18.

Meanwhile, Noel Gallagher has been working on some stuff of his own. He's set to release the solo album Noel Gallagher's High Flying Birds in the UK on October 17 on his own Sour Mash label, and in the US on November 8 on Sour Mash and Mercury. According to Noel's website, he and his band Noel Gallagher's High Flying Birds will tour this fall. No dates have been announced yet. He's also said that he's completed a second album "which is a continuation of his collaboration with Amorphous Androgynous." That album is set to come out in 2012.

In other news, Liam says that Noel lied about how Oasis split up in 2009.

"I got diagnosed with laryngitis for the V festival - I wasn't hung-over," Liam said.

"I do gigs when I've been hung-over. I'm a big boy. I'm not going to cancel a gig because I've got a headache."