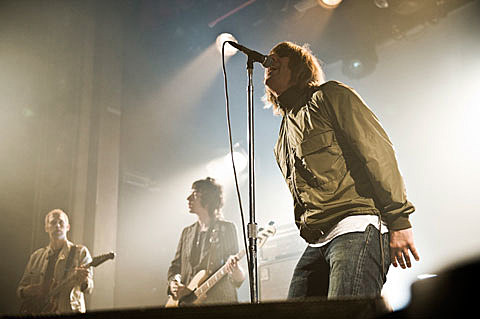 Beady Eye, the band
formed when
Oasis broke up in 2009 by members Liam Gallagher, Andy Bell and Gem Archer, have called it quits. Gallagher let the world know on Saturday (10/25) via Twitter:
Andy Bell (who played bass in Oasis and guitar in Beady Eye) also confirmed the split via Twitter:

This has fueled speculation about a reconciliation between Liam Gallagher and his brother (and Oasis songwriter) Noel and the reformation of Oasis (perhaps the original lineup) but, more interestingly, this frees up Andy Bell who co-fronted Ride in the early '90s.

Ride were one of the best of the original crop of UK shoegaze bands, bringing strong pop songwriting (and Byrds-y flourishes) to the din of guitars. Their first two albums, 1990's Nowhere and 1992's Going Blank Again, are essentials of the era. (1994's Carnival of Light dropped the effects pedals in favor if Britpop styles and is about half good; 1996's Tarantuala is best not talked about.) The band toured the US with Slowdive, whose tour just hit NYC's Terminal 5. There's probably no other shoegaze band from that era that would be more welcome back. Mark Gardner, the other singer-guitarist in Ride, toured the West Coast over the summer, and his sets included lots of Ride songs.

Beady Eye's other guitarist, Gem Archer, fronted Heavy Stereo in the mid-'90s whose 1996 album, Deja Voodoo, was released by Creation.

Some Ride videos below...

Ride - Leave Them All Behind