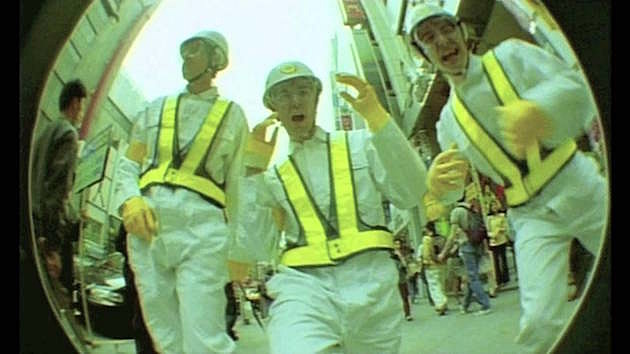 The Beastie Boys were inducted into The Rock and Roll Hall of Fame in 2012 and now an exhibit featuring Beasties memorabilia will open at the organization's museum in Cleveland this weekend:

"Since we had such a rich, deep collection of stuff from the Beasties when they were inducted, we thought we'd put it out," Rock Hall curator Meredith Rutledge-Borger says. "We also wanted to represent more stuff from some of our recent inductees."

Rutledge-Borger says the unit will feature hand-written lyrics of the group's hit "Brass Monkey," action figures, Mike D's Volkswagen medallion and outfits from the "Intergalactic" video, among other things. - [Cleveland.com]

Elsewhere in the Beasties-related Universe: Champagne Jerry (aka Neal Medlyn) has a new album, The Champagne Room, that is out March 5, featuring beats by Adam "Ad Rock" Horovitz and Max Tannone, plus guest vocals from Bridget Everett, Erin Markey, Murray Hill, Larry Krone and Jim Andralis.

To celebrate the LP's release, Jerry's turning New York Live Arts space into The Champagne Room for five shows from March 2 - 5. Neal will open each show as himself, followed by Champagne Jerry, who will be accompanied by the Champagne Club, a rotating cast of performers including Horovitz, Kathleen Hanna, Bridget Everett, Carmine Covelli, and "a series of real and invented bands that exist in a world of cheap gold, dance, memories to last a lifetime and effervescence." March 2 - 4 performances are at 7:30 PM, and on March 5 there are two performances at 7:30 PM and 10:00 PM. Tickets are on sale.