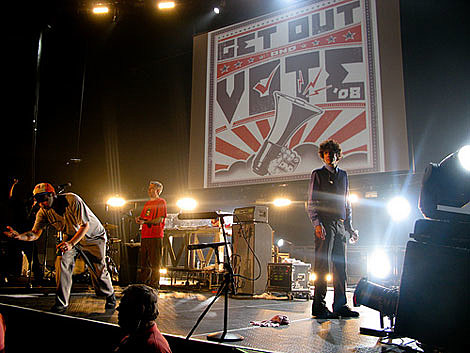 When the song ended and both audience and artists caught their breath, Mixmaster Mike donned a cheesy Uncle Sam Hat and the "Get Out And Vote" logo flashed on the video screens. An energetic (and skinny) Mike D. shed his green button-down sweater and addressed the fans, thanking them for coming out and encouraging them to vote this Tuesday.

"We're doing big things on this stage," he said with conviction and to applause, adding that the tour's been fun -- unlike the last 8 years of politics. "I voted absentee at home and personally, I voted for Barack Obama." Then they asked the audience to throw their hands up in the shape of 'O' for Obama, kicking off a set of tracks from Ill Communication with "Flute Loop," "Alright Hear This" and an amazing live version of "Sure Shot," Ad Rock's robust energy carrying the set. [Minneapolis City Pages]

AFTER YOU VOTE: places to watch the results in NYC