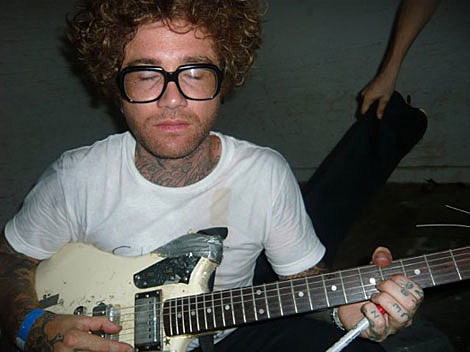 R.I.P. my dear brother, friend and band mate Beau Velasco. We are all so devastated that I will keep this short. We love you and you will be missed. You affected us all so much in the most positive ways. Our lives would not be as is, if not for you. We love you.

Beau Velasco, beloved brother, co-founding member, guitarist and vocalist of The Death Set, passed away Sunday, September 27, in Brooklyn, New York. Beau co-wrote the Worldwide album and previous two EP's with Johnny Siera, with whom his partnership reaches back beyond The Death Set's beginnings, to Black Panda from the Gold Coast, Australia. The Death Set moved from Sydney to the US in 2005, but Beau took a back seat from touring a while later. This original core lineup of the band had recently rejoined to write and record the next record and to resume touring together.

Beau was also a talented artist, tattoo artist and jewelry designer. Working at Saved Tattoo in Williamsburg and Black Ink in Harlem. His artwork has been exhibited in Australia and America. There is a nice piece remembering him in the New York Village Voice here:

Please see details for the memorial services below and forward to those who wish to pay their respects:

Memorial Service (This will be a gathering and a celebration of Beaus life.)
Saturday 10/3
Saved Tattoo
3 Hope Street
Brooklyn, NY 11211
5:00pm

A memorial is also being organised by band mate Dan Walker for Beau's hometown, the Gold Coast, Australia. It will be tentatively on October 22nd. There will be a gathering and later a wake at Elsewhere Bar. Please email Dan drumpsychology@hotmail.com for details. Please note this is being organised by friends from the Gold Coast and is not an official funeral orgainsed by Beau's parents Charles and Ella. When those details become known I will let people know.

This was our last show together...