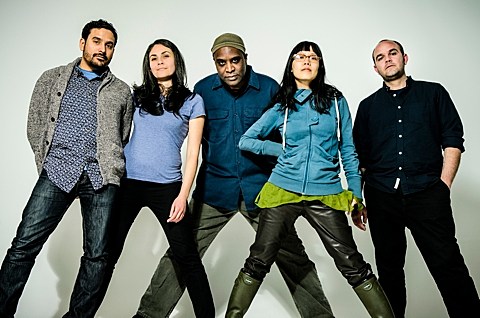 Beauty Pill was formed back in the early 2000s by Chad Clark, who formerly fronted the great DC/Dischord eccentrics Smart Went Crazy. Beauty Pill released two EPs, followed by their 2004 debut album, The Unsustainable Lifestyle (all on Dischord), but then never got around to following that up and had to take several years off after Chad was diagnosed with viral cardiomyopathy. Fortunately, Chad made it through two surgeries, is well enough to make music again, and returned last week with the long-awaited followup to their debut. The new album's called Beauty Pill Describes Things As They Are and it came out on their new label home of Butterscotch Records (order yours).

The new album has Chad and co. in great form, some of it picking right up where they left off and other parts covering new ground. You can stream the whole album below, and also watch the video for the track "Dog With Rabbit in Mouth Unharmed" (premiering in this post), which is sung entirely by Chad's bandmate Jean Cook.

Beauty Pill will also begin a tour this week, which includes a three-night run in Virginia and then comes to NYC on May 8 at The Bell House with Grooms (who also have a new album out this year) and The Flag. Tickets for that show are on sale now.

All dates are listed, with the album stream and new video, below...

Beauty Pill Describes Things As They Are Album Stream (via Noisey)