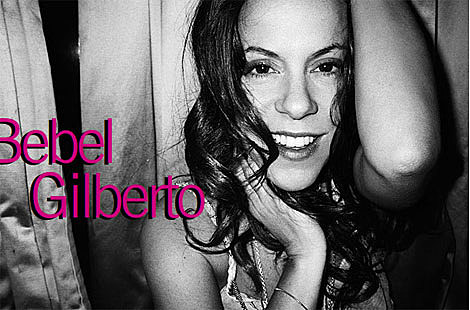 As far as I can tell, Bebel Gilbeto has just four shows coming up, and all of them are in NYC, which makes sense since the Brazilian singer-songwriter was born and lives here.

Tickets are still available for both Red Hot + Rio 2 shows happening at the Brooklyn Academy of Music tonight/Thursday and Friday. As previously noted, CéU, Curumin, José González, Otto, João Parahyba (from Trio Mocoto), and Bebel Gilberto are the artists playing those shows.

An all-star benefit tribute to the music and culture of Brazil, Red Hot + Rio 2 salutes Samba Soul, the post-tropicália movement of the 70s that merged elements of North American soul music with Brazilian rhythms. Mixing samba with R&B, soul with baião, pioneering artists like Jorge Ben Jor and Tim Maia signaled a cultural awakening that changed the direction of Brazilian music forever. The concerts at BAM bring together the newest generation of Brazilian and international artists who represent the legacy of this influential musical style.

Bebels' third upcoming show is in a much more intimate setting, but unfortunately/not surprisingly, the $40 tickets to her December 9th show at Joe's Pub are all sold out. Tickets are still on sale though for her recently announced, fourth upcoming NYC show, at Town Hall, but that's not until June. All dates, in a list format, below...