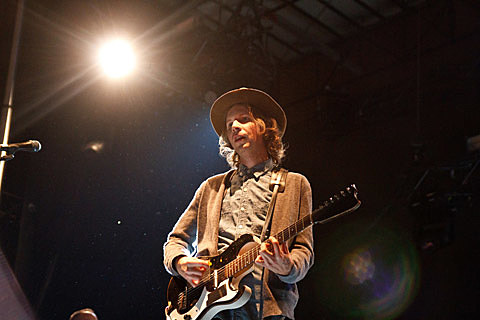 We knew that Beck was planning on releasing an acoustic album this year, but Rolling Stone reports that the singer actually has two new albums on the way in 2013, the second being a more proper follow-up to 2008's Modern Guilt. The magazine also says Beck has parted ways with Universal and will release both records independently. While we wait for those, Beck has dropped a new stand-alone, non-LP (and very Animal Collective-y) single, "Defriended," which you can stream below.

As mentioned, Beck will be playing a stripped-down set opening for Bob Dylan and Wilco at Nikon at Jones Beach Theater on July 27, and a full-band Celebrate Brooklyn! show on August 4.

You can also hear a bunch of bands and singers performing his sheet-music-only album, Song Reader, at a free daytime Joes Pub show on June 21 which is part of Make Music NY.