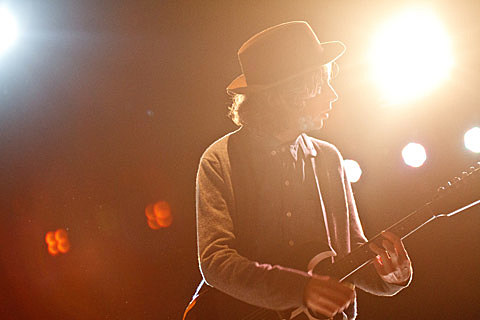 As mentioned, Beck is performing a few shows this summer, playing the Newport Folk Festival, joining Bob Dylan and Wilco's AmericanaramA tour for the Nikon at Jones Beach date on July 27, and then playing Propect Park for Celebrate Brooklyn! on August 4. There was some confusion about how and with whom he would be performing on this tour, which has since been cleared up. The Newport Folk Fest and Jones Beach "Americanarama" shows will be stripped-down acoustic sets (but not "solo"). The Celebrate Brooklyn (and Boston show two days prior) will be full-band electric.

Meanwhile, according to a press release, "these very special performances will feature never before heard material from an upcoming acoustic record. The record can best be described as a self-contained work, one that came in the form of a burst of inspiration following the completion of last year's groundbreaking Song Reader sheet music album." No details on that album, like a title or release date have been given.

Updated Beck dates are listed below.