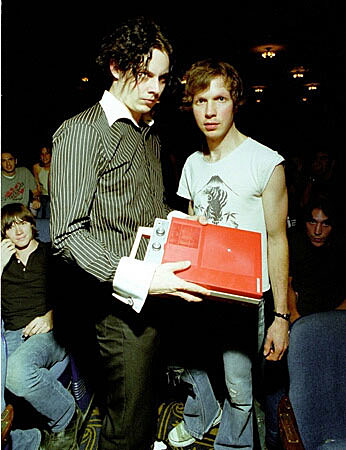 The latest news making the rounds is that The White Stripes have announced they recorded a few new songs with Beck.

Papertiger points out why this is not a surprise.....

1. Beck appeared in the Stripes’ video for “The Hardest Button To Button”.

3. Jack showed up to play guitar with Beck & Smokey Hormel at their show in Detroit in August 2002. They played “99,” “Last Fair Deal Gone Down,” and “Cold Brains.”

4. Jack plays bass on “Go It Alone” on Guero, and they reportedly did a few other songs together then too (but it’s the only one that’s out yet).

5. In a photo gallery on beck.com, Meg was pictured, hanging out with Beck and his band on a boat in Australia (I think in 2003).

6. Beck covered “Black Math” once on stage (a bootleg surfaced of this show, but it has not fallen into the hands of Beck collectors yet). 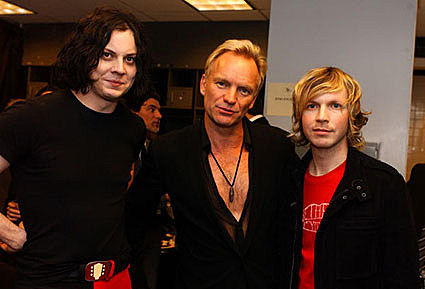 The White Stripes have been busy making a video for "Conquest", their third single. Directed by prolific music videographer Diane Martel, the video was shot over two days in Artesia, California. Filmed with a visual urgency that brings the song's Spanish themes, frantic horns and compulsive pounding rhythm to life, the video follows an explosive - if unconventional - love story that pits man against bull in the ultimate conquest. To make his performance as authentic as possible, Jack White trained extensively with famed bullfighter Dennis Borba. The video will premiere on MTV on November 26th and will be available on iTunes from November 27th.

"Conquest" will also be released as a single; stunningly packaged and featuring three exclusive new tracks across three 7" vinyl formats - one black, one white and one red colored vinyl. Jack and Meg recently recorded the new tracks with Beck, who co-produced all three tracks during a recording session in his living room and also contributed vocals and piano to "It's My Fault For Being Famous" and slide guitar on "Honey, We Can't Afford To Look This Cheap".

Inspired by the "Conquest" video, each single will also include a Mondo Toro trading card featuring the legendary, near-mythical matadors El Sloth, El Blanca Rosa and El Perdedor. Despite being from early 1900's Spain and Portugal, these bullfighters look strangely familiar. US copies of these singles will also include a different poster with each release.

These vinyl singles will be released in the US on December 18th and in the UK on December 31st. Full track listings are listed below:

7" One (Black vinyl)
A: Conquest
B: It's My Fault For Being Famous

7" Two (White vinyl)
A: Conquest
B: Honey, We Can't Afford To Look This Cheap

Digital Maxi Single (US only)
1. Conquest
2. It's My Fault For Being Famous
3. Cash Grab Complications On The Matter
4. Honey, We Can't Afford To Look This Cheap
5. Conquest (Acoustic Mariachi Version)

Photos via HERE and HERE