Beck at Station to Station (more by Lukas Hodge) 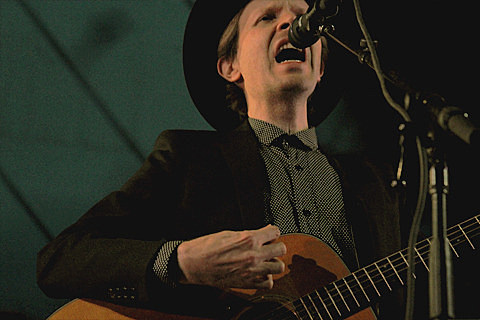 Joining Thom Yorke, David Byrne and others in the hatred of Spotify is Beck. In a recent interview with Argentina's Pagina12 (translated by Future Heart), Beck said:

The music business is changing a lot, it also changes the way people listen. So I thought a lot about what it means to make music, whether people pay attention. (Citing an example in the frenzy leading up to the release of David Bowie's The Next Day, which fizzled by the time the record was released, Beck continues) It seems that major artists released an album and the next day no one talks about it.

So many musicians feel that we are taking some time to acclimate to the new environment, we are trying to figure out what it all means. As a society, what does it all mean? What are you doing to our brains, our nervous systems and our souls (laughs)?

I think most musicians feel alienated from the business side of music. We are in a business created specifically for business people, marketing. And that's how the world works, because music is like any other product they have to sell. I need to think about how to deliver it to people. But if left to musicians it would be something completely different, I'm sure. I'll try to keep that in mind.

[The rise of these sites are] inevitable, it's something that is coming like it or not. But I pose the question of how I can hold on, because what Spotify pays me is not even enough to pay the musicians playing with me or the people working on the disks. The model does not work.

I think the saddest thing about streaming is the issue of sound quality...it's like watching Citizen Kane on your phone. That's what people are listening to!

Hopefully, we will find the way to change that. There are many opportunities to improve the digital files and I know that Neil Young is working on a system for that. Eventually it will happen and people will fall in love with the music.

Beck's new album Morning Phase is due out in February 2014.