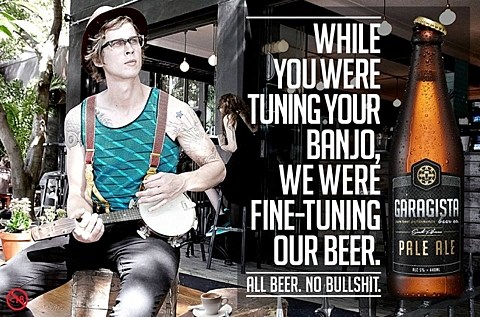 South African Garagista Beer Co. took the gloves off and made it personal in a new ad campaign for its limited edition Garagista beer, claiming, among other things, that "Every time you drink a Garagista, a hipster's favorite band goes commercial." Ouch. Other major digs include "If your bike only has one gear, ride on. This isn't the beer for you," and "For those who know the Ramones made music, not t-shirts." You can take a look at them all over at AdWeek.

The brewer went even further with a nearly 2-minute advertisement in which a swarm of hipsters armed with assorted hipster paraphernalia tries to steal the beer from an unsuspecting delivery man.

The beer "goes well with bands you have heard of," built for popping cold ones and kicking back.