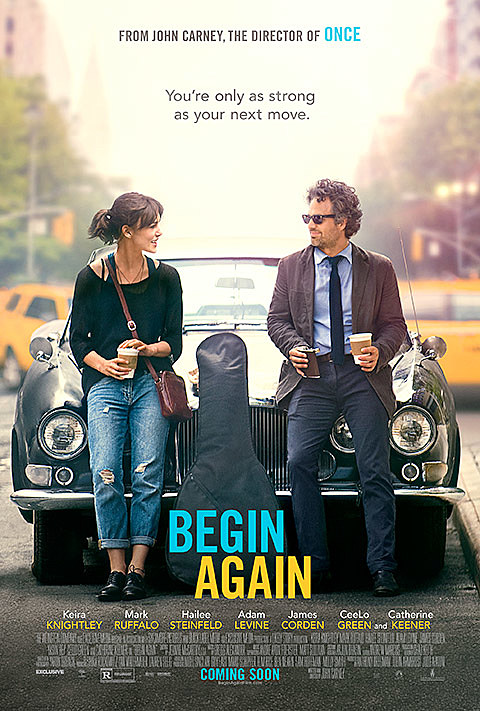 So, are you planning on heading out to the movies this weekend? Well, if you are like the majority of people out there who will be, then it's to see a bunch of giant Autobots and Decepticons who turn into cars and trucks and blow up shit all over the place. Yes, as you may have heard, Michael Bay's next playful orgy of destruction, Transformers:Age of Extinction, opens tomorrow. I've seen it and while at times fun, it's mindless stupidity can be somewhat tiring after two-and-a-half plus hours (the longest Transformers yet). Imagine the head blowing up scene in David Cronenberg's Scanners with less blood and lots more loud explosions over and over and over.....

While these big action/explosion/comic book/toy films are the box office bonanzas these days, there is still room for smaller films, indie films, more personal films. Just look at what's out now: David Michod (director of one of my favorite films of the last few years Animal Kingdom) gritty, intense and bleak revenge/avenge film The Rover; Jenny Slate proves there is life after saying "fuck" on network TV with the much-talked about indie now film Obvious Child.

There's also Polish filmmaker Pawel Polikowski's stunning and intense IDA; Roman Polanski's latest sexual/psychological drama,the novella-to-Broadway-to-film, Venus in Fur; and comedian/actor/writer Mike Myers' entertaining directorial debut about one of the most legendary characters ever to work in the film and the music industry, Supermensch: The Legend of Shep Gordon.

Great films all but one in particular that is well worth your time and of particular interest to readers here is Begin Again, the new film from director John Carney.

When I first saw Once, Carney's previous film, it was about five months before it was released. I knew Carney from having played in The Frames (with Glen Hansard) but had no idea what to expect having not seen his any of his earlier films. Like most people, I came away entranced. The kind of good film you want to tell everyone you know to see. Happily I can say the same thing about this new film.

As mentioned briefly, the film is about a down on his luck, once-successful maybe now washed up music producer, Dan, played by Mark Ruffalo. Having had success in the '90s with a number of hip hop bands, he has now been fired by his partner (Mos Def credited of course as Yasiin Bey) in an indie label startup. Drinking his sorrows away one night in a club (shot in Arlene's Grocery, fyi) he happens to hear an unknown British singer songwriter Gretta (the always wonderful Keira Knightly, doing her best Norah Jones, Carole King, Feist), coaxed by her friend up to the stage, timid and unsteady to sing a bare acoustic sweet ballad about heartbreak. Heartbreak she knows firsthand, having been dumped, on the brink of stardom, by boyfriend Dave (played by Maroon 5 singer /TV's The Voice star Adam Levine). The film then traces the backstory of how each ended up in there that night forging a connection. Then, over a conversation about the idea of selling out and which artist has never sold out (their answer: Randy Newman), Gretta agrees to let Dan produce a record for her. One that will be recorded at various spots all over NYC, outdoors and on the go, capturing the sounds of the city within the songs. 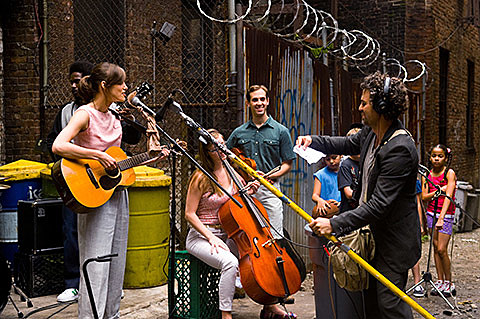 Much of the film is beautifully shot on the Lower East Side / East Village (yes there is still some music and life going on there, take that Brooklyn) and other parts including a super montage set piece where Dan and Gretta walk around the city at night listening to different songs on her IPod. Other scenes which I don't want to give away show the deft directorial touches that only someone who is deeply involved with music could make. The music, which may not have anything as starmaking a song a Once's "Falling Slowly," is still very good -- most of it was written by onetime New Radicals frontman Gregg Alexander (remember "You Get What You Give?").

The acting is uniformly great. Mark Ruffalo is an always able actor and sometimes stupendous if you have seen the recent HBO film The Normal Heart. Keira Knightly shows surprisingly lovely tone in her singing. Adam Levine, in his first big acting role, does a fine job with his character and while not a fan of Maroon 5, the man has a sensational god-given voice that most singers would kill for.

Notable mention as well goes to James Corden, who plays Gretta's Brit busking friend. He's a very engaging and funny actor, and also great singer who will be showing far more of his singing talents later this summer in David Frankel's One Chance (the very charming story of Paul Potts, an amateur opera singer, who unlikely went on to win Britain's Got Talent).

"Can A Song Save Your Life" was Begin Again's working title and probably best sums it up. Two struggling people who find each other and, through music,  their own redemption. Does that sound familiar to a film called Once? Certainly it is in much the same vein. You could say it was a more-polished version of Once. Like the previous film, the two characters don't fall into any contrived "Hollywood" relationship. It is filled with yearning and doubt and What Ifs that actually mirror real life. Even with this, it's the kind of film that can easily lend itself to a description such as "cliché." I've seen some others gripe about how, like some criticized Once, music is used to cheat a flimsy story. Ignore that, drop the pretensions, and give in and it's sweet charm will have you. If as I suspect, like myself, that most of you reading this consider music to be a large part of your life I think you will enjoy Begin Again as much as I did.

Once is in Limited Release currently, playing in NYC at the Angelika and Union Square 13. Trailer for Begin Again, plus a few stills as well as shots from the its press conference yesterday at the Crosby St. Hotel, below... 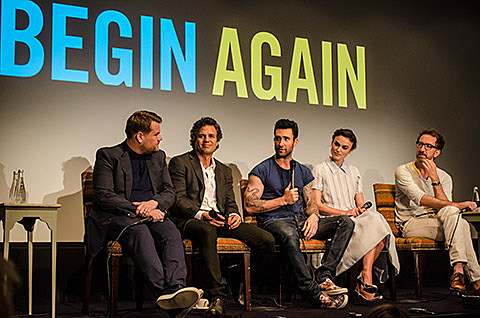 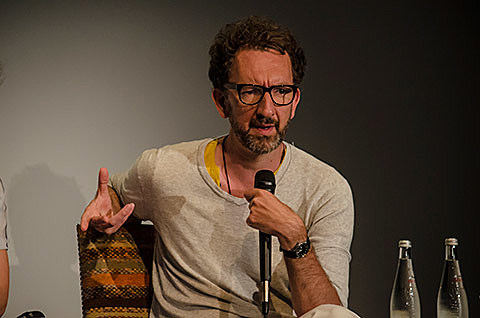 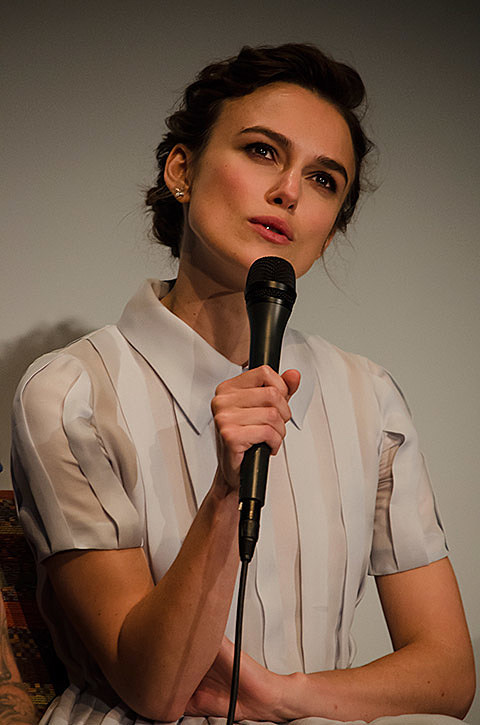 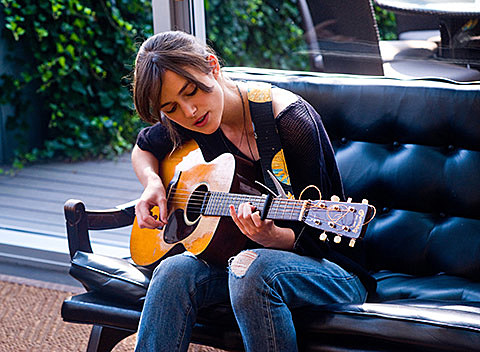