Rumors about the lineup of the 2014 edition of the Metal Alliance package tour have been floating around for a while, but now they're much more substantial announced: the lineup will feature Behemoth in the headlining slot, with 1349, Goatwhore, Black Crown Initiate, and Inquisition. It's a compelling lineup -- Behemoth recently released a promising new song (with an NSFW video), and Inquisition's 2013 release Obscure Verses for the Multiverse was one of the year's most critically acclaimed metal albums. It's also the most black metal-intensive lineup in the tour's history, which says something about the genre's growing cachet.

Tickets for all dates, including NYC at Irving Plaza on 4/19, are on presale now. Tickets for the NYC show and at least some other dates officially go on sale Friday via Ticketmaster, after another presale via Ticketmaster Wednesday.

Everyone on the tour except Behemoth also plays the New England Metal & Hardcore Fest, which goes down from April 17-19 at the Worcester Palladium.

Check out the full run of dates, the tour flyer and that NSFW Behemoth video if you haven't seen it yet, below... 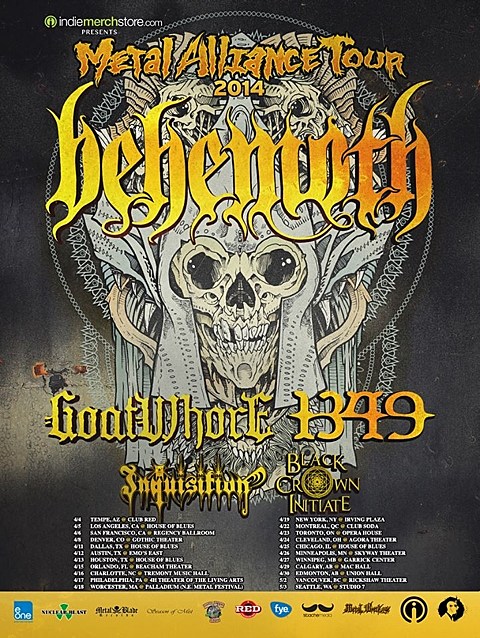