Behemoth at Irving Plaza in 2012 (more by Greg Cristman) 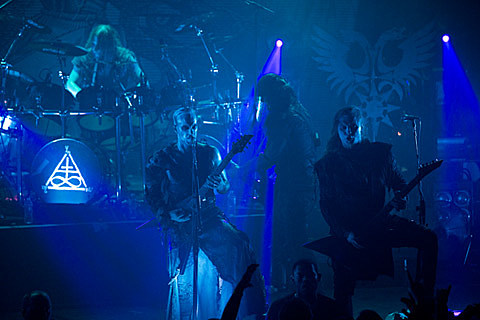 We streamed a track (and NSFW video) from Behemoth's forthcoming album, The Satanist (due out 2/4 via Metal Blade), back in December, called "Blow Your Trumpets Gabriel"--here's what we said about it then:

It's far moodier and more patient composition than the cluttered, robotic death/black metal that they've produced recently. They can still put the hammer down when they need to, though; the song's final minute is both the catchiest and most intense moment I've heard them produce since the mid-aughts. The video is pretty cool too, especially if you're into artsy black-and-white shots of evil rituals happening in slow motion.

Moodier and patient don't apply to Behomoth's new signle, "Ora Pro Nobis Lucifer" (translation: Pray For Us, Lucifer), which finds Behemoth back to their menacing, furious black/death metal ways. Post-leukemia treatment Nergal and Co. sound as vigorous as ever, making The Satanist an early metal highlight of 2014.

Behemoth's on this month's cover of Decibel and, as discussed, they will head out across North America in early spring with Goatwhore, 1349, Inquisition and Black Crown Initiate for the Metal Alliance tour, which includes a stop in NYC at Irving Plaza on 4/19. Tickets for that show are still available. Behemoth's also slated to play France's crazy loaded Hellfest.

Listen to "Ora Pro Nobis Lucifer" and check out Behemoth tour dates below...