Did anyone notice a member of Beirut playing a horn with The Citizens Band when they opened for the White Stripes at Irving the other night? I could be wrong. 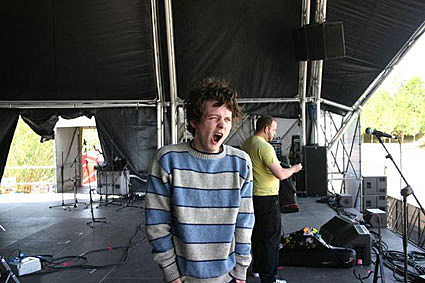 Back in May it kind of leaked out that Grizzly Bear-fan Zach Condon and his band Beirut would be playing three NYC shows in September, but the tour dates I just received only list two September dates - so either plans changed, or they'll announce the third one after the first two sell out. All dates, and new album info, below....

As you somewhat already know...

The new record (yet to be titled) will be released on October 9th on Ba Da Bing!, and features a notable shift in sound from Gulag. With song titles like "Nantes" and "Cherbourg," the record is more a love letter to French culture. Featuring thirteen tracks in all, this new album continues on the trajectory that began with the Lon Gisland EP, where the entire eight-member band plays along on the recordings. Besides the eight-member orkestar and guests, Owen Pallett of Final Fantasy adds lush string arrangements to the songs, as well as guest vocals on a track entitled "Cliquot."

The album was recorded in two separate sessions - at the A Hawk and a Hacksaw practice space, and at Arcade Fire's ornate studios outside of Montreal. To date, Gulag Orkestar has sold over 100,000 copies worldwide.

Beirut will be playing a limited number of North American shows this Fall in theatrical venues. Colleen, whose new album Les Ondes Silencieuse is out this month on The Leaf Label, will open.