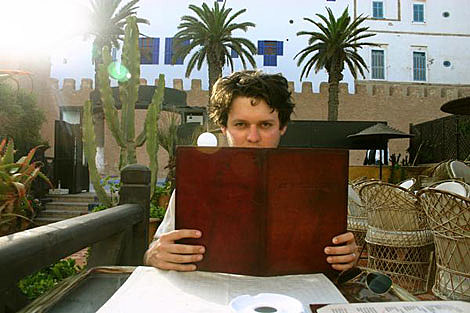 Beirut is back, with a double dose of EP goodness for your listening pleasure!

Entitled March of the Zapotec, the first EP consists of songs written by Beirut and recorded in Mexico with the help of Oaxacan march masters The Jimenez Band. The second EP, Holland, showcases Zach's latest bedroom-style recordings under his former moniker Realpeople, including the previously released "Venice" (in the 2007 Believer music issue), and "My Night With the Prostitute From Marseille" (on the Natalie Portman curated Big Change charity album). Taken together, the two EPs proudly display the scope of Beirut's work over the last year.

Keep an eye out for a February release on Zach's own Pompeii Records, distributed by Revolver in the U.S. and Forte in Europe.

Beirut is also back with random Brooklyn shows popping up one by one. First there was the February 6th show at BAM, and now February 4th at Music Hall of Williamsburg. $20 tickets for the latter go on sale Friday at noon.

Beirut also has a song on the new Dark was the Night comp coming out in February.

Beirut's last show at MHOW was in May of this year.