Bela Fleck throws down his heart... 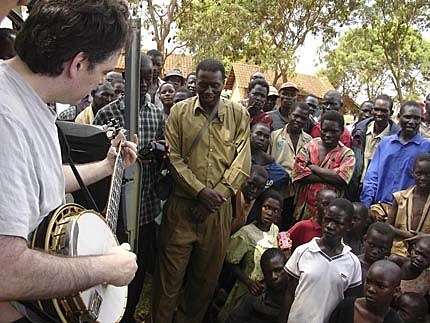 Béla Fleck will continue exploring African music this summer on two separate, celebrated tours: the ³always adventurous² (USA Today) banjo master will join Oumou Sangare and her band, and revive his acclaimed duo run with Toumani Diabate. Sangare, the great Malian singer known as the ³Songbird of the Wassoulou,² is considered Fleck¹s gateway to African music and prominently featured in his renowned documentary and album Throw Down Your Heart. Toumani Diabate, a 71st generation Kora master, collaborated with Fleck throughout 2009, including performances at Telluride and Bonnaroo.

Throw Down Your Heart is the 11-time Grammy winner's most ambitious project to date and has earned some of the best reviews of his career...

The NYC stop on the Bela/Toumani tour is the previously-announced, free show at Central Park Summerstage which happens tonight (Monday, August 3rd). The movie trailer and all dates below...

Throw Down Your Heart