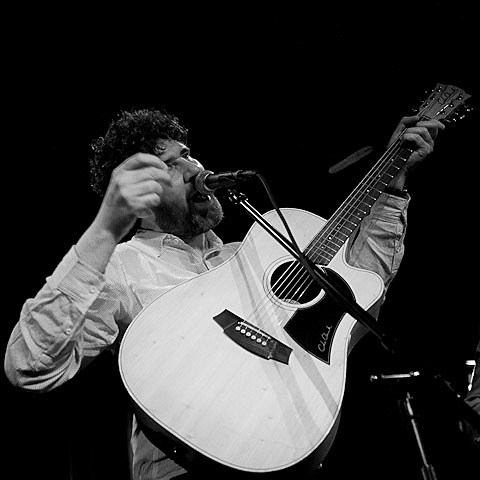 Belle & Sebastian's Stevie Jackson is a genuine charmer. Headlining the final night of Chickfactor 20: For the Love of Pop at The Bell House, he did much of the set solo (and with a scraggly beard and a bushy head of hair, Jackson looked a lot like Angel from The Rockford Files) and held the crowd's attention the whole time, performing a mix of Belle & Sebastian songs (not necesarilly his own), songs from his new solo album (I Can't Get No) Stevie Jackson, and covers (including a surprisingly great take on Elton John's "Rocket Man"). He's also a master of between-song banter and an audience participation leader. It was a great end to the three-day festival that felt more like a party than a series of concerts.

Belle & Sebastian's Stevie Jackson was last here for the chickfactor 20 celebration back in April. He's back in the U.S. for more chickfactor shows, this time on the West Coast, and while here is fitting in another NYC show which happens TONIGHT (8/28) at The Living Room. Tickets are $10 and still available. Stevie's got a few other U.S. dates as well and those are all listed below.

While on the subject of chickfactor, in addition to the West Coast shows in Los Angeles and San Francisco, they'll be doing one in London on November 16 - 18, with The Pastels, Would Be Goods, Amor de Dias and The Aislers Set, Tender Trap, Pipas, Bridget St. John, The Real Tuesday Weld, Legendary Jim Ruiz Group, Harvery Williams, and The Starfolk... plus a film screening and quiz night. More info is here.

And in more chickfactor news, this fall the pop zine will publish issue #17, its first new issue in a decade. That's exciting news.