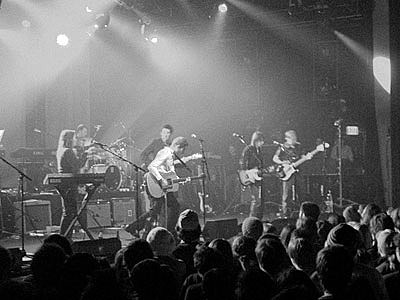 Belle & Sebastian and the New Pornographers (and Matter of Trust) played two nights in a row at NYC's Nokia Theatre last week.

"Then the first surprise of the night. After The NPs set, Carl started talking about how honored he was to be sharing the stage with his heroes. I assumed he was talking about B&S, but instead he brought out a little known German, one-song Billy Joel cover band called Matter of Trust. Of course, the 50 people in the audience that were at the Bowery Ballroom Invite Them Up Release Party knew who Matter of Trust really were: Comedians Jon Benjamin, Jon Glaser, Todd Barry, Tom Shillue, and James McNew from Yo La Tango." [Fake Century]

"There was this crazy drunk Scottish guy there with his girlfriend and he WAS SO DRUNK. He kept smoking and getting ashes all over people's heads and he waved his hands around as if he was conducting the songs. He knew all the words, and I think he sees Stuart as God or Jesus, or something. He and his girlfriend kept having violent fights and she would storm away, only to push right back up to the front to argue with him again. I COULD NOT STOP LAUGHING. At one point, Stuart jumped off the stage and started crowd surfing and KENDRA AND I TOUCHED HIM, YESSSSSSS!" [paulina's livejournal]

"I left the theatre, a very happy girl. A happy girl with a new destination; the after-party at the uber-hip Royal Oak in Williamsburg. Sadly, it was a sheer disappointment as I got trapped by a Frenchman who wanted to talk about the architect Le Corbusier, and how I should travel to Scandinavia, as they're so far ahead of America in regards to design. I failed to mention to him that he was signing to the choir. As a result, I missed any sign that Belle and Sebastian was within my reach, but methinks they were never there." [A Strawberry Fire]