I couldn't get a ticket. Luckily Jerry Yeti was there. He wrote this post.... 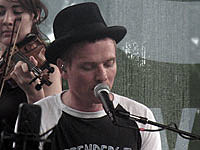 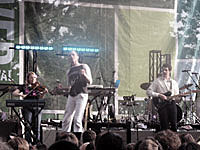 "Maybe I'll read off the sponsors again" the MC joked to the audience yesterday as the rain died off and Belle & Sebastian were about to take the stage. He didn't, but he did quiz us on the founding sponsor of the River to River Festival. Hint: it has the word "American" in it and it's not American Apparel.

As we waited following Martha Wainwright, the venue played Neko Case's "Fox Confessor Brings the Flood" and I began to have horrible – and yet wonderful- memories of Sasquatch and the weather that once silenced Neko. Would it also silence Belle & Sebastian? Indeed, the rain came as expected but then fled like a bunch of Loyalists and Redcoats, retreating from the fort at the Southwest Battery. When all was clear, Stuart Murdoch led us triumphantly through a pop-filled afternoon. Murdoch's a fan of banter, and there were plenty of remarks made about them deciding whether to recognize our independence after all these 230 years. Scotland has always been a bully like that. The band was puzzled why we booked a Scottish band to play our Independence Day. Murdoch suggested that perhaps it's because they're an Indie band. Or as I could imagine AA Milne writing:

The multitude of band members –plus a couple sitting in from the Battery Park Philharmonic or something- filled the multifaceted sound quit nicely. I always found Murdoch's voice alluringly weak, like that kid in every movie who has never sang a note in his life and suddenly there he is up on stage singing for the first time… and it's marvelous. Untrained, but imperfectly perfect. "Lord Anthony" could be that kid, and it was easily my favorite song of the day.

I didn't pay close attention for the entirety of the nearly two hours they played. Twenty minutes into the performance, I was distracted by a sea of incoming messages, reading "goal goal goal!!!" and from another friend, "Gooooooooooooal!!!" This was followed by a second deluge of messages a minute later as Italy scored its second goal over Germany in two minutes… all in the final seconds of tripleteenth overtime.

This may not mean much for our country, but may I remind you that USA tied Italy with only 9 players? So in a roundabout way, it was a good moment to be an American.

And I'll add this bit from Gothamist: "Masters at working the crowd, the band had the audience hanging on every word, lyric, sound and move. One fan was brought up on stage, one asked to apply mascara on singer Stuart Murdoch and one taking the mic to help sing. Murdoch also addressed the whole ticket issue, not mentioning that coffee shop by name, saying if they had known they would have surely done something about it."