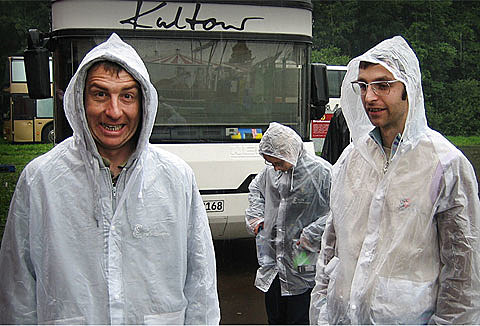 With more shows being added all the time, we thought it timely to offer an update on this year's touring calendar. It's beginning to look like a pretty busy year and we still have more shows up our sleeve...

For various reasons we cannot announce all the shows at the one time, but (all going to plan) in addition to these listed below we will be squeezing in shows in Canada, Mexico and the USA as well as a trip to South America between now and the end of the year. Of course we will also have some more European festivals and a few UK shows to announce later in the year too...-Belle and Sebastian

The band is currently working on new material, and as it states above, will be touring the world in 2010. So far dates have been announced in Europe and Asia. NYC is definitely on the way.

Meanwhile singles by/from God Help The Girl, a musical film written by B&S member Stuart Murdoch, are being released . You can stream and buy the newest single, "Baby You're Blind," (it was released on May 24th via Rough Trade) below. Current B&S dates and other stuff is down there too...

"Baby You're Blind" - the third God Help The Girl single will be released by Rough Trade on Monday 24th May.

The track, which is not on the album nor part of the GHTG subscription package, was recorded in Glasgow last year with Linnea Jönsson, the lead singer of Swedish band, These Dancing Days on vocals.

The 7" also features a new version of 'A Down and Dusky Blonde' with lead vocals by Dina Bankole.

Both tracks will also be available to buy digitally via this website, and will be bundled with the artwork and video for 'Baby You're Blind,' which was filmed in Stockholm in January of this year.