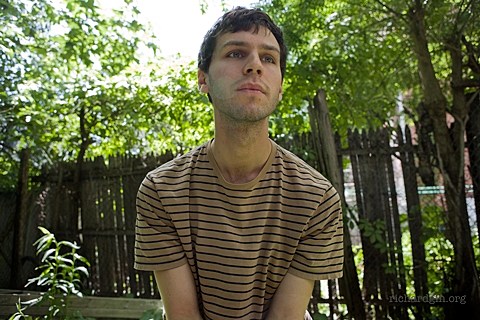 Bellows is the project of Brooklyn songwriter Oliver Kalb, who you may also know as a member of Eskimeaux and Told Slant, whose main members Gabby Smith and Felix Walworth (respectively) are both in Bellows. Rounding out the Bellows lineup is Henry Crawford, aka Small Wonder, who like Oliver, Gabby and Felix is a member of the art collective The Epoch. Bellows' new album, Blue Breath, comes out next week (9/2) via Dead Labour (pre-order), the same label that released this year's Big Ups album. It's an album of bedroom folk/pop that's more than a little indebted to early Sufjan Stevens, but it's refreshing to hear someone keeping that kind of stuff alive in 2014. A full stream of the album premieres in this post and can be listened to below.

Bellows and Eskimeaux will be heading out on a tour together which begins at Brooklyn's Shea Stadium on Friday (8/29). Also on that bill is The Ugly Club, Terrible Terrible and Stargazy. The tour continues at SUNY Purchase the next night with The Hotelier and hits other NY and NY-area places including Rochester, Albany, Bard College, Troy, and New Brunswick. All dates are listed below.