Ben in the studio with yMusic (via) 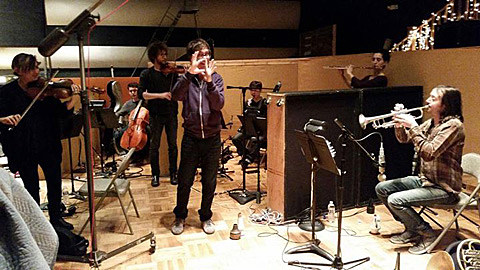 For his new album, Ben Folds has collaborated with NYC classical sextet yMusic which he wrote about, enthusiastically, on Facebook:

I don't recall ever being quite so excited about an album I'm making. I'll let you decide if that's a good thing or not. It's just that we don't often get to make a record that we've never heard before. I LOVE my band on this record - NYC's almost classical sextet, yMusic. Love 'em musically and personally. They are pushing me. Collectively and individually they've been on quite a few great recordings (Sufjan Stevens, Bjork, Dirty Projectors, Bon Iver, Blake Mills and lots of other stuff) since most of the group graduated Julliard nearly a decade ago. Then there's their new cellist, Gabe who just got out of Curtis, which is a maximum security music conservatory - hardcore shit. He'll cut a bitch over a parallel 5th.

We tracked this album in 12 days total, with a lot of time spent, me, Rob Moose and CJ Camarieri, sometimes in New York, LA or Nashville, arranging. The playing, the recording, happened quickly.

On this record, yMusic are the rock band, straight up - not ornamentation. We call the ornamentation, "and strings" which is beautiful of course, just not what we are doing. The odd instrumentation is yielding something that I can't wait to release. It's a pop record, if that's what you call what I write.

The record features nine songs plus a concerto for piano and orchestra. No title nor release date has been set -- Ben says "we can easily get this record out by September" -- but you can watch a bowling-themed teaser video below.

You'll be able to hear them collaborate before the fall, as Ben and yMusic will be touring this spring. The full tour hasn't been announced but it includes three NYC shows: Bowery Ballroom on April 27, then Music Hall of Williamsburg on April 28, and Town Hall on April 30. Tickets for the NYC shows go on sale Friday (2/27) at noon with an AmEx presale for Bowery and MHOW beginning Wednesday (2/25) at noon.

All known dates are listed, along with the teaser video, below...