I can still feel my skin rippling from that Ben Frost gig. Those oceans of sound and vibration are overwhelming. -HallochHill

Ben Frost @ Littlefield microreview: The sound of the universe rending itself in two, as wolves howl into the cold. Gorgeous. Terrifying. -stribs 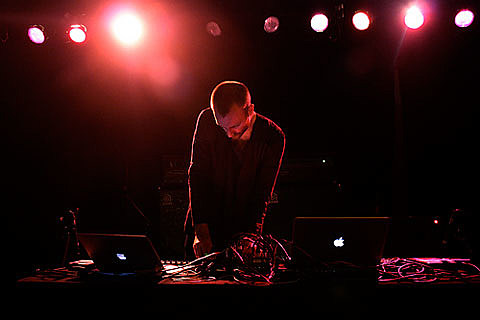 When Sónar Chicago first announced that Ben Frost would be on its inaugural line-up, their commitment to innovative electronic music became clear. This wasn't going to be a watered-down sibling to their annual Barcelona event, rather it would present dance music and experimental sounds in equal measure. Frost was an ideal candidate for bridging this gap, as his... powerful recent releases like 2007's Theory of Machines and last year's By the Throat, ensured this would be one of the most eagerly anticipated performances of the entire festival...

Poised behind his laptop with a guitar in his hands, the image of Ben Frost on stage immediately evokes that of another guitar-laptop musician, Christian Fennesz. Instrumentation choice is where the similarities end, however, as Fennesz creates a more shimmering, ethereal reality of reserve and restraint. Frost opts instead to maximize the minimal, plotting an anxious course against the audience. With a debt owed to both Swans and Throbbing Gristle, there's little room for delicacy. -[Gapers Block]

While the review above comes from his show in Chicago as part of the Sonar festival, the tweets at the top (and the photo) come from Ben Frost's show last night (9/15) at Littlefield in Brooklyn.

The Icelandic electronic artist will do his best to pay any debt owed to Swans by playing Brooklyn Masonic Temple on 10/8 as the support act for the previously discussed Swans/Baby Dee shindig. Tickets are still available. Ben Frost will not appear at the now sold-out Swans show at Bowery Ballroom show on 10/9.

The NYC and Chicago show were a couple of a few that Ben Frost had planned for the US. Full tour dates and some video, including a live vid from Sonar, is below.