Ben Gibbard on The Colbert Report 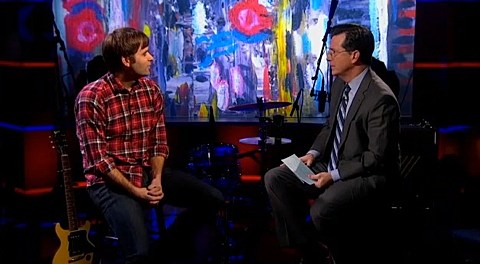 Death Cab for Cutie/Postal Service frontman Ben GIbbard appeared on The Colbert Report last night (1/10) to perform the song "Bigger Than Love" off of his 2012 solo album, Former Lives. Ben brought out fellow Tom Scharpling associate Aimee Mann to play bass, sing the first verse, and join Ben on vocals in the chorus. They were also joined by Aimee's pal Ted Leo on guitar and Jon Wurster on drums. Ben also did a solo acoustic performance of "I'm Building a Fire," and like Stephen Colbert's other musical victims, he was interviewed on the show too. You can watch videos of both songs and the interview below.

Ben Gibbard - "I'm Building a Fire" on The Colbert Report