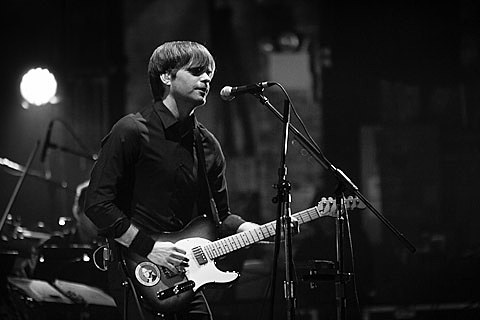 Death Cab for Cutie frontman Ben Gibbard releases his solo debut LP, Former Lives, this Tuesday (10/16) via Barsuk and he'll play an invite-only record release show in NYC during CMJ on the day of the release (10/16) at HiFi Bar (169 Avenue A, formerly Brownies where Death Cab played way back when). Bird of Youth singer Beth Wawerna is opening the show. Again, there are no tickets available to the public for this show but Ben is giving list spots away on his Facebook.

After this release show, Ben will kick off a previously discussed tour, which Advance Base supports. That tour hits NYC on November 5 at Town Hall. Tickets for that show are still available.

Ben was also on Fallon this past Friday (10/12) to play "Teardrop Windows" and "Oh, Woe" off of Former Lives. You can watch videos of those two performances, stream Former Lives in its entirety, and check out an updated list of all upcoming dates, below.