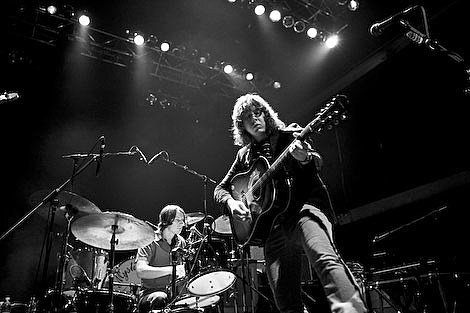 ATO Records is excited to announce the release of Ben Kweller's new record on February 3, 2009. The album is his fourth full-length and is called Changing Horses. It was produced by Kweller and recorded mostly in Austin, TX, where he and his family recently re-located. The title is meaningful as it represents a sea change for the 27-year-old Texan-bred musician...

...Changing Horses is... a full-blown, straight up country affair, brimming with immaculate pedal steel, twang and multi-part harmonies. It features his touring band -- Chris Morrissey on bass and vocals, and Mark Stepro on drums and vocals -- as well as the brilliant Kitt Kitterman on pedal steel.

To make the record, Kweller dug down to his deepest roots. "I grew up bass-fishing, playing in creeks, and shooting BB guns," Kweller says. "Country music was the soundtrack to my life. It's still a big part of who I am. When Garth Brooks or Alan Jackson come on the radio, somethin' happens inside. Brings me back to the trees, back to pushin' cars out of the mud. Reminds me of my hometown."

As previously mentioned, tickets are currently on presale for Ben Kweller's NYC show at Town Hall on February 25th. Now all of the dates have been announced, and they are below...