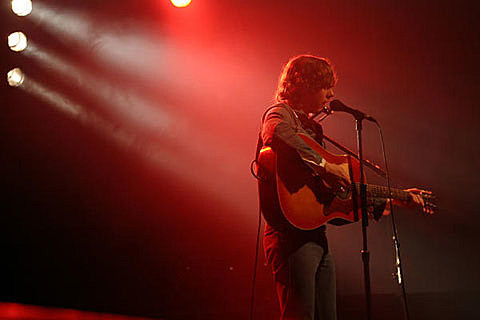 Ben Kweller will venture down under for a string of October dates before heading back to the US to play a string of dates in November. The NYC area will get the look three times in ten days. On 11/17 Kweller will headline Maxwell's in Hoboken (tickets). That's followed by a pair of shows at The Rock Shop on 11/27 (early with 6:30 doors, late with 10PM doors). Julia Nunes will provide support on the earlier Rock Shop show.

Ben Kweller released Changing Horses early last year, and has a new LP in the works...

OUDaily: What's the concept behind the new record?

Ben: It's called "Go Fly a Kite." It's kind of [makes you think of] "Go f*** yourself," I guess. [laughing] It's really electric -- a lot of electric guitars and pianos and acoustic guitars and harmonies. It's like a lot of electricity in the music. It's upbeat, uptempo. But it deals with some darker stuff. Some of the songs I wrote as I was leaving New York three years ago. One of my best friends got this new girlfriend who just didn't want him to have anything to do with any of his friends or anybody that had loved him before her. So there's a song called "Jealous Girl" and "Gossip." It's pretty fiery. But there's still my optimistic outlook throughout the record.

What about the alt-country sound you explored on your last album, "Changing Horses?" Are you moving away from that here?

Ben: It always depends on what songs I write. That stuff's always in me. All these different types of music live in me, and sometimes they choose to come out and sometimes they don't. On "Go Fly a Kite," there [are] a few songs that have definitely a rootsy element. I think fans that discover me through "Changing Horses" will still be able to get me through this record and find something that they'll dig. In particular, there's a song called "Full Circle" and one called "I Miss You."

All Kweller tour dates, and some video shot at a recent Austin show, below...