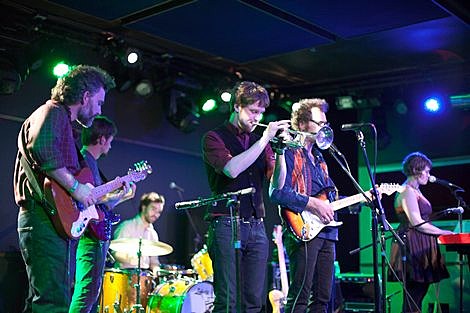 Four years removed from their debut All This Could Kill You, the New Jersey husband/wife duo Ben + Vesper welcomed their follow-up, Honors, this week via Sounds Familyre. Check out a pair of songs from that record, "Knee-Hi Wall" and "My Father's Eyes", downloadable above and streaming below. And while you're down there, make sure and check out the video for "My Father's Eyes" which you can watch for the first time here.

Ben + Vesper will, so far, celebrate the release with a limited run of dates. The weekend before Valentine's Day (Feb 11th, 12th) will see the couple take at two shows in North Carolina, and the band has reserved a date for NYC: February 28th at Zebulon with Aaron Roache.

In addition, Ben of Ben + Vesper directed a video for "Grow Up" by Sounds Familyre labelmate Danielson. The song (downloadable above/streaming below) is the first single from Danielson's forthcoming LP Best of Gloucester County due on 2/22 and featuring appearances from Jens Lekman, Emil Nikolaisen (Serena-Maneesh), Glen Galaxy (Soul-Junk), Mark Shippy (US Maple), and Chris Cohen (Cryptacize). Danielson has an NYC show of his own in the near future too. He'll bring the clan to NYC to play Le Poisson Rouge on March 25th. Tickets are on sale.

More details on that Danielson LP are below, alongside all tour dates, song streams, and videos.

Track List
1. Complimentary Dismemberment Insurance
2. This Day Is A Loaf
3. Grow Up
4. Lil Norge
5. But I Don't Wanna Sing About Guitars
6. People's Partay
7. Olympic Portions
8. You Sleep Good Now
9. Hovering Above That Hill
10. Denominator Bluise
11. Hosanna In The Forest