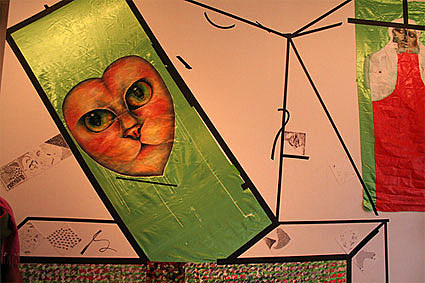 "Stairwell is a small independent gallery in Providence founded in January of 2006 and run by Haley O'Connor and Natalie Purkey. The gallery is deeply rooted in Providence's art community, and prioritizes curatorial creativity and support of all the artists that it works with. Building relationships between artists, curators, and the larger community of Providence is privileged over commercial gain. If you have ever shown your work at Stairwell, played a show there, come to an opening and eaten the homemade food that the curators have prepared, or stopped in to visit, you know that this is a rare and magical venture. As such, it is inevitably risky. After a car accident in Los Angeles a few months ago (in which, thank goodness, nobody was hurt, but a hybrid rental car was nearly totaled) Haley is now deeply in debt to her insurance company. Although Stairwell has been growing in every way, this financial setback creates a significant obstacle, which we think that the community has the power to remove, or at least mitigate. It is time for all of us who have enjoyed the expansive generosity of Stairwell to return the favor and give back a little to support this singular and inspiring gallery." [Todd P]