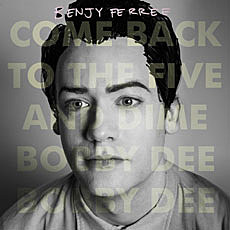 Come Back To The Five And Dime, Bobby Dee Bobby Dee, the second full-length album from Ferree, is a musical eulogy to the forgotten child star, Bobby Driscoll. After "portraying" Peter Pan in the 1953 Disney feature, Driscoll faced the reality of growing up in a world without Neverland and was fired from Disney after the making of Peter Pan for the unforgivable crime of hitting puberty and developing acne. No longer cute and profitable, he struggled to find work and fell into a life-long battle with drugs until ultimately dying homeless and broke in a Manhattan tenement in 1968 at the age of 31. With police unable to identify his body, the Academy Award winner ended up in an unmarked pauper's grave on New York's Hart Island.

Ferree's eventual discovery of Driscoll's sad fate led to this album - an allegorical ode not just to his childhood hero, but to anyone who's gotten the short end of the stick in life . Musically, Ferree lets his distinctive blend of rock and roll and Americana across new borders and genres. Drawing as much from the country meandering of Jimmie Rodgers and the passionate blues pounding of Son House as he does from the vocal hysterics of Freddie Mercury and the balladry of Nick Cave, Ferree crafts a sound that is difficult to fit into any one category, but upon listening is as gratifying as it is unique.

Benjy Ferree plays Union Hall in Brooklyn tonight/Thursday (12/4).The track above is from the new album, coming out February 3, 2009 on Domino.

Tickets are on sale for Cursive's upcoming show at Union Hall (1/18). Tickets for their Mercury Lounge show (1/19) are now on Am Ex presale (regular sale starts Friday). Cursive also added a January 17th show at Grog Shop in Cleveland which is also on sale.

Benjy Ferree's new album tracklist and all (two) dates, below...