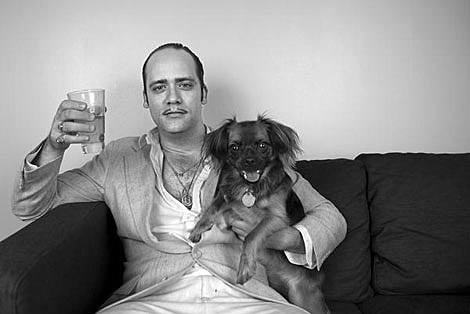 Brightest Young Things: I wanted to ask about your new record...where did all the reviews get the idea that it's a concept record?

Benjy Ferree: Man I have no idea; I never said that it was a concept record.

BYT: The name is from an Altman movie right? I remember loving it as a kid but I don't if it has any bearing on the story of Bobby Dee...

BF: I don't know, I just stole the title, you know?

...I guess Benjy hasn't read his own press release, which basically tells the entire story of Bobby Driscoll and how it relates to his new album. One sentence: "Come Back To The Five And Dime, Bobby Dee Bobby Dee, the second full-length album from D.C. musician Benjy Ferree, gives Bobby Driscoll a recognition that is long overdue: a musical eulogy to a forgotten child star who was chewed up and spit out by the unforgiving Hollywood meat market."

"Fear," off that record and posted above, may not actually be about a doomed child star, but it's still pretty good white-guy-soul song.

Benjy Ferree's tour with The Black Hollies kicked off September 3rd in Benjy's homebase of DC. Tomorrow (Sat, Sept.5th) both bands play Mercury Lounge (tix available at the door), and tonight (9/4) they play Maxwell's with The Nouvellas. Tickets are still on sale.

Ferree on NPR's Tiny Desk Concert and all tour dates are below...