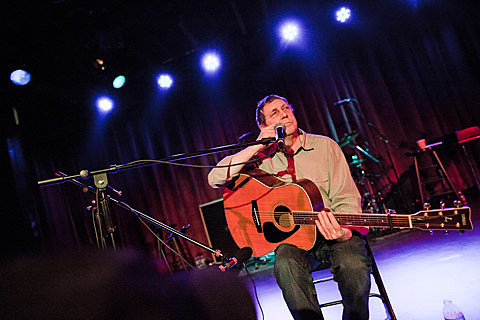 Scottish folk musician Bert Jansch, a founding member of the band Pentangle and a well-known guitarist in his own right, has died at the age of 67.

Jansch, who had cancer, passed away in the early hours of Wednesday morning at a hospice in Hampstead, north London.

Between 1967 and 1973 he was part of acoustic group Pentangle, best known for their 1970 hit single Light Flight.

John Renbourn, Jacqui McShee, Danny Thompson and Terry Cox were the other original members of the band, whose albums included Basket of Light and Solomon's Seal.

The group reformed in 2008 after receiving a lifetime achievement honour the previous year at the BBC Radio 2 Folk Awards.

As a solo artist, Jansch received his own lifetime achievement accolade at the same event in 2001.

He last performed, with Pentangle, at the Royal Festival Hall on 1 August. [BBC]

Bert last played NYC as part of a tour with Neil Young in April. He played Iridium Jazz in December not long after sharing a bill with Pegi Young and special guest Neil Young at the Bell House in Brooklyn. Rest In Peace Bert.