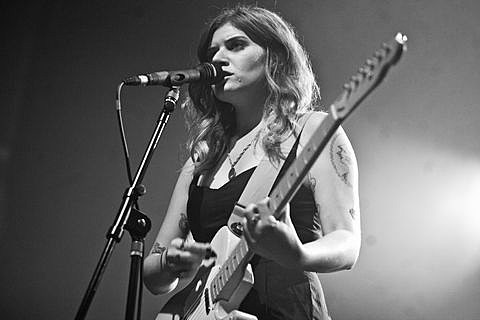 Last year, a video made internet rounds of Best Coast covering Blink 182's "Dammit" at one of her shows, and soon after she contributed vocals to New Found Glory's 2011 LP, Radiosurgery. But Best Coast's pop punk love doesn't stop there. It's just been announced that Best Coast will open for Green Day on their upcoming tour which hits Brooklyn's Barclays Center on January 16. (Tickets for that show are still available.) Maybe this also has something to do with Green Day's desire for power pop, garage rock, and a return to the simplicity of Dookie?

This tour kicks off in January, 2013 but in advance of it, Green Day stopped by NYC for an initimate show at Irving Plaza on Saturday (9/15). At that show, they played a 38-song set spanning their career and included eight songs from their Lookout! Records days. The setlist and a video from that show are below.

You can also stream ¡Uno!, the first of their three upcoming albums, in its entirety at the band's facebook page (in exchange for liking the page).

A list of all dates, along with that setlist and video are below.

Green Day at Irving Plaza - 9/15/12 Setlist:
Welcome to Paradise
Murder City
Know Your Enemy
Nuclear Family
Stay the Night
Stop When the Red Lights Flash
Carpe Diem
Let Yourself Go
Kill the DJ
Oh Love
Holiday
Burnout
Hitchin' a Ride
Scattered
Letterbomb
Highway to Hell / Crazy Train
Brain Stew
St. Jimmy
Boulevard of Broken Dreams
2000 Light Years Away
Only of You
Disappearing Boy (w/ snippets of Stairway To Heaven and Sweet Home Alabama)
Christie Road
Coming Clean
409 In Your Coffeemaker
J.A.R. (Jason Andrew Relva)
Brat
Stuck With Me (Began the song with "86" instrumental snippet)
At the Library
Paper Lanterns
When I Come Around
She
F.O.D.
King for a Day
Shout / (I Can't Get No) Satisfaction
Wake Me Up When September Ends