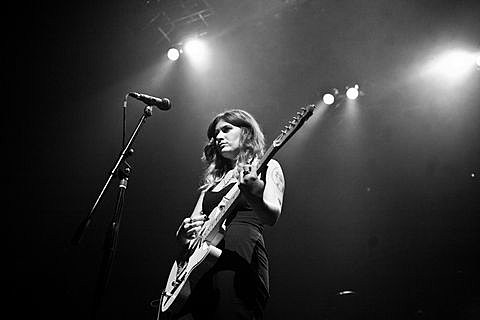 As mentioned earlier today in a tickets-on-sale post, Best Coast, who were initially supposed to open for Green Day on the latter's tour before it was postponed, are in fact opening for them on their rescheduled dates which include a NYC show on April 7 at Barclays Center. Tickets for that show are are on sale now and all tickets purchased for the original date (1/16) will be honored. All dates are listed below.

Speaking of artists that would probably be better fit to headline Terminal 5 but are opening in big arenas for pop stars, Miguel was announced to open for Alicia Keys on her tour which hits NYC on April 5 at Barclays Center and April 11 on Madison Square Garden. Tickets for those shows are not on sale yet but you can check ticketmaster for updates. All dates are listed below.

And one more: The Hives are touring in February and March as an opening act for Pink and that tour hits Madison Square Garden on March 22. That show is sold out, but the tour also hits Izod Center (3/23) in NJ and Nassau Coliseum (3/25) in Long Island and tickets for those shows are still available. All dates are listed below.

In related news, bands who you would think might be opening for bigger acts at Madison Square Garden, but are actually the headliners themselves include Sigur Ros (3/25) and Passion Pit (2/8). We're not sure who is opening for Sigur Ros, if anyone, but Matt & Kim open for Passion Pit. Muse also has two MSG shows coming up (as does Lady Gaga). Mumford and Sons also have two upcoming Barclays Center shows, one with The Felice Brothers, the other with Haim (both with Ben Howard).