the seventh in a series where we asked comedians to tell us what was good this year.... 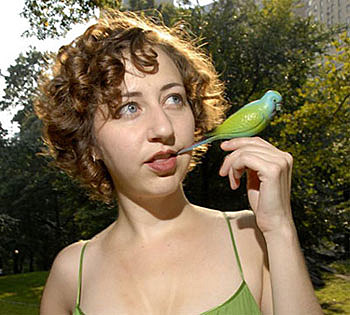 Kristen Schaal is a favorite of mine and a favorite of BV readers. Lotsa people know her as Mel from the show Flight of the Conchords, but she's much more than that. She hosts Hot Tub Variety Show with Kurt Braunohler and has a series of videos on Super Deluxe called Penelope Princess of Pets (also with Braunohler). She's also won several awards including Best Alternative Comedian at the HBO US Comedy Arts Festival, an Andy Kaufman Award, and a Best Female Stand-up Award at the 2006 Nightlife Awards in NYC. Recently Kristen parted ways with South Park creators Trey Parker and Matt Stone because her ideas were too weird (their loss!). Kristen took some time to tell BV what tunes she was really into in '07. - Klaus

Top Ten Songs that I discovered this year in no particular order:

Flight of the Conchords - Out of Character(Kristen Schaal)