this post contains never-before-released MP3s and pics, and a bunch of links. enjoy.

A list of the "best shows of 2004" is obviously a very personal, subjective, and somewhat random thing. I go to a lot of concerts, but still probably only saw less than .001% of all the live music events held in NYC in 2004.

Even among the shows I'm interested in, I probably only hit a small number. I attended three of Central Village's nine favorites, one on Melody Nelson's list of nine, none of the NY equivalents of the twelve Torr posted, and only four of One Louder's fifteen.

Everyone at a show leaves with a different experience. You could be at "the greatest show of the year," but if you're stuck in the back corner directly behind a basketball player, after not having slept the night before, you would probably be happier at home in bed. Mood plays such an important part of show enjoyment. blah blah blah. 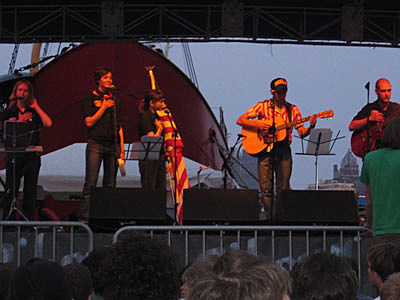 Sufjan, South Street Seaport, July 1st - this free outdoor show held on Canada day brought Canada banter into Sufjan's Michigan routine, and included a surreal experience where Sufjan debuted his own version of The Star Spangled Banner against the backdrop of the ships in the Sea Port while the crowd and band all held up flags handed out by Sufjan.

2) Any Decemberists show. Like Sufjan, I actually got Decemberists overload and started not going to the shows they played toward the end of the year. (pics)

Decemberists & Clearlake two nights in a row, March 25 & 26, Mercury Lounge & Bowery Ballroom - Clearlake is an amazing band that came out with one of my favorite albums of 2003. Decemberists never play a bad show.

Decemberists & The Long Winters, June 17, Echo Lounge, Atlanta, GA - I saw this same show in NYC (twice), and just so happened to be working in Atlanta when the tour made it there. Seeing one of my favorite bands in a foreign place makes this one special. This tour also made me a fan of the Long Winters, who put on an excellent live show.

3) TV on the Radio, April 8, Mercury Lounge - TVOTR shows often get mixed reviews. They proved why they deserve all the hype at this small venue show.

TV On The Radio

4) Scissor Sisters, Morningwood & Special Guests, May 23, Bowery Ballroom - I can't say enough good things about Scissor Sisters and Bowery Ballroom as a venue. The mix was magical at this LAMDA benefit show that included the always amazing live band, Morningwood. Special guests Fred Schneider from the B52s & half of Kiki & Herb made the show that much more exciting.

5) They Might Be Giants, David Cross, Todd Barry, and Sarah Vowell, June 4th, Southpaw - A benefit for 826NY, it was great to see TMBG in a small venue in their home of Brooklyn, NY. David Cross and Todd Barry, the biggest comedians on the NY indie rock circuit, cracked me up as usual. Todd actually stole the show, and convinced those with blogs to include the term "jewforever" on their blogs the next day. It worked.

They Might Be Giants | David Cross | Todd Barry | Sarah Vowell 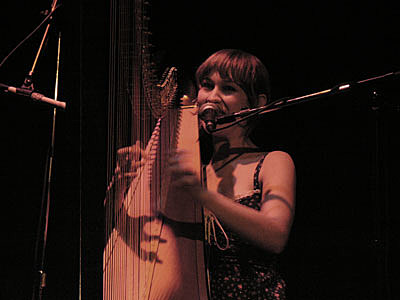 Devendra, Joanna, Antony, and Vetiver, June 21st, Bowery Ballroom - I'm not listing my shows in particular order, but this one would definitely be in the top three. Devendra puts on such an amazing live show, I leave every show not believing what I just witnessed. Add Joanna Newsom as an opener. It what was the first time I saw her live, and I had prepared all week by listening to the Milk Eyed Mender non-stop. Add Antony, another amazing artist, who I was seeing for the first time. Add Vetiver, a group of musicians who play with Devendra and have their own group. so, so, so, so, good.

Joanna Newsom, June 22nd, Mercury Lounge - an early show added at the last minute while Joanna was in town with Devendra. A chance to see her two nights in a row. With no advanced tickets, I was already standiong on line around 6:00 for the 7:00 show. (pic)

7) The Secret Machines & Calla (solo, acoustic), July 13, Sin-e - shortly after being signed to a major label, and blowing up to the point being noticed by David Bowie & landing the opening spot on Interpol's tour, The Secret Machines played this intense benefit show in a small Lower East Side venue.

Franz Ferdinand | The Delays | The Futureheads 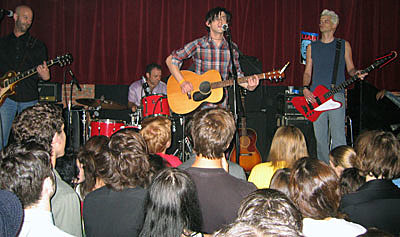 9) Bright Eyes featuring Craig Wedren, Kevin Devine, September 23, Northsix - Yet another big band, small venue, benefit show. This one was for the legal defense fund of the protesters arrested at the RNC. Craig Wedren surprised me by a) being part of the Bright Eyes band, and b) performing two Shudder to Think songs. Kevin Devine, although I'm not a huge fan, was a great opener. (pics) 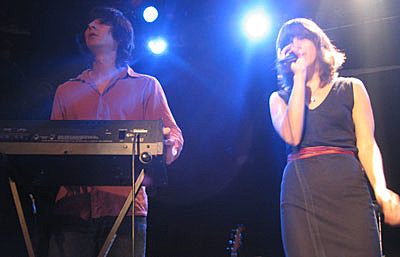 10) Fiery Furnaces, September 25th, Bowery Ballroom - After catching their disappointing performance earlier in the year at The Siren Festival, it was extremely refreshing to see The Fiery Furnaces at their best. Tight, magical show. (pics, pics) (fluxblog review) 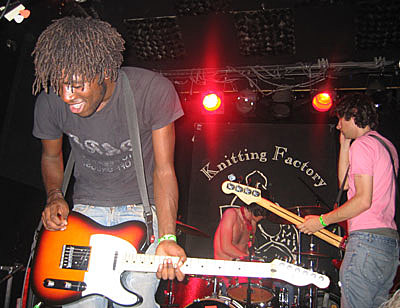 11) Both Bloc Party shows in NYC 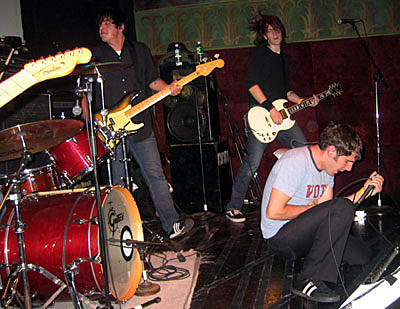 12) Gratitude, The Features, October 12, pre-CMJ party @ Downtime - the NYC debut of Jonah Matranga's new band, Gratitude was especially exciting for me. Jonah, previously of Far, New End Original, and Onelinedrawing, is one of my favorite musicians. Plus, this was free. (pic, pics)

13) CMJ Day 1, October 13 - possibly one of the most surreal days in my personal indie-rock-concert-going history. In one day, in four small venues including a radio studio and the "legendary" CBGB, I saw Ted Leo, Sufjan Stevens, The Decemberists, The Arcade Fire, Gratitude, Magneta Lane, and David Kilgour. (pics)

Ted Leo, Sufjan Stevens, The Decemberists, Museum of TV & Radio, KEXP studio - Three of my favorite artists in a row in a room the size of my bedroom, live on the radio. (pics)

Magneta Lane, CBs Downstairs Lounge - These young Canadian girls caught my attention earlier in the year, so I made it a point to check out their U.S. debut during CMJ. (pics)

Gratitude, CBGB - after seeing Magneta Lane downstairs, I went to the main stage of CBGB upstairs to catch the second night in a row of Gratitude.

Arcade Fire, David Kilgour, Mercury Lounge - I actually saw David earlier in the night, and went back to Mercury Lounge after Gratitude to catch the most anticipated of all CMJ shows, The Arcade Fire. They lived up to Funeral, and then some (pics, pics) 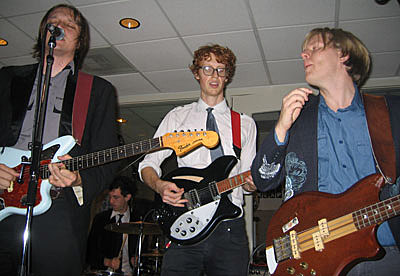 14) CMJ Day 2, October 14 - as if the previous day wasn't enough, I finished off my two day CMJ run with a second day of Arcade Fire, then Baby & Har Mar Superstar, and a final late-night Jonah Matranga (sans Gratitude) show. (pics)

Arcade Fire, Museum of TV & Radio, KEXP studio - KEXP let about 50 lucky fans watch the Arcade Fire perform in a room that barely fit all members of the band, let along a studio audience. (pic)

Har Mar Superstar & Baby, Coral Room - Craig Wedren (Baby) officially made appearances at four of my favorite concerts of the year. This was another one. Har Mar Superstar surprised me as one of the most fun performers I saw in 2004. (pics, pics)

18) Broken Social Scene three nights in a row, once with the Pixies - a BSS rollercoaster with a sprinkling of Pixie dust. (pics, recap, pics, pics) Shows I Wish I Saw

Most Disappointing Cancellation Due to Rain

Too Profitable to Pass Up Scalping Moments (so I didn't go)

Most Blogged About Concert Reunion Tour

More Shows I Posted Pictures Of