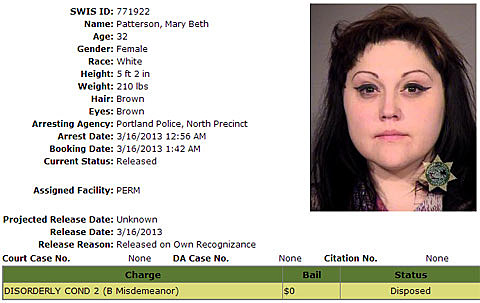 The singer was reportedly arrested at 1:42am after being denied service in the Bungalo Bar in Portland for being too drunk, you can see her police mug shot above. A source told Willamette Week that after being thrown out of the bar, Ditto "walked out in the middle of the street, threw off her shoes and purse and screamed 'Obama! Obama!'" which alerted police who subsequently arrested her.

Additionally, a Reddit user who was drinking in the same bar as Ditto on the night posted his account of what happened prior to the arrest. The user states that "By 1:30 Beth was completely blackout drunk challenging people to fights. My friends and I headed over to the Bungalow from the Alibi only to be met with Beth's belligerent asshole posse. We got our drinks and went out to the back, only to hear her and her friends breaking shit." Adding: "Fifteen minutes later she was arrested for being a complete fucking cunt. The bartender called the police because she kicked him in balls." [NME, via]

We last caught Beth, in a much better mood, when she visited Brooklyn in September.